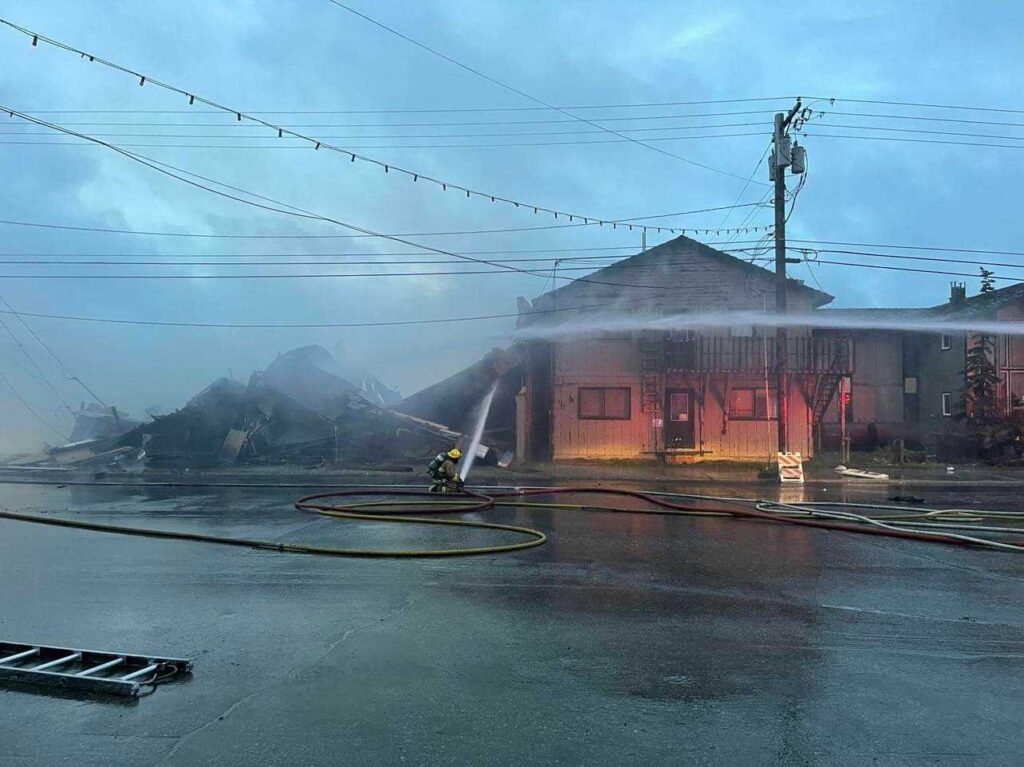 The Bering Sea Bar and Grill is gone after a fire started in the building the evening of Sept. 17 while Nome was being buffeted by a powerful fall storm. No deaths were reported and the few who were injured recovered.

“Definitely was an active fire. We had three go to the hospital, get treated and released. There were no deaths involved,” Nome Volunteer Fire Department Chief Jim West Jr. said. The blaze started around 7 p.m. on Sept. 17, West said.

TJ Wright, a local Nome resident who witnessed the fire, told KNOM he heard an explosion after some propane tanks burst and the Bering Sea Bar and Grill was, “engulfed in flames, sending embers flying all over town.”

In order to contain the blaze and keep other buildings in Nome from catching fire, NVFD demolished the building Saturday evening.

“The bar itself, the restaurant was a total loss. We were able to save the hotel, which is three feet next to it,” West said.

A portion of the backside of the adjoining Nome Nugget Inn suffered damage from the fire before NVFD could extinguish it. However, the hotel structure is still intact at this point. NVFD crew continued to fight the fire and monitor throughout the night and early morning hours on Sunday, Sept. 18. Chief West Jr. said Sunday morning there were still some hotspots at the building site the department was monitoring but otherwise no active fires or blazes in Nome.

Image at top: The Bering Sea Bar and Grill in Nome was demolished after catching fire in a storm. Photo by Danielle Slingsby, used with permission (Sept. 18, 2022).