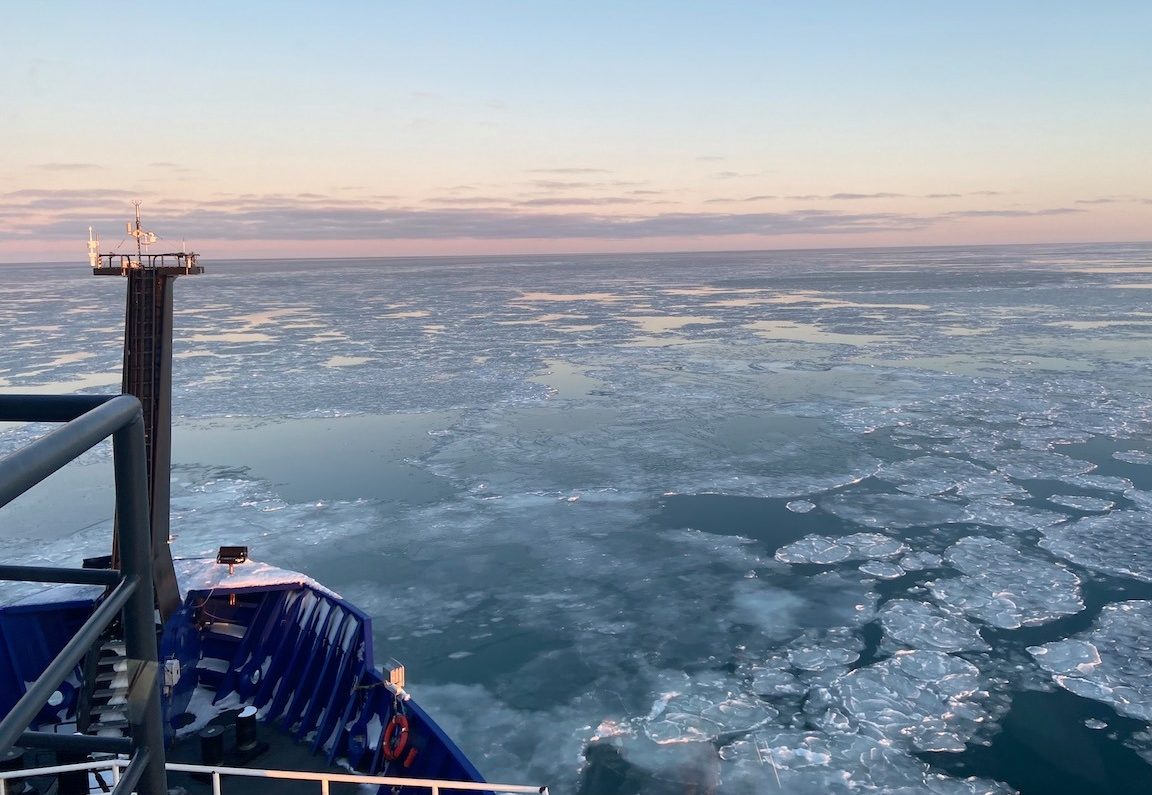 The final research cruise of 2021 in the Bering and Chukchi Seas came through the region in November. Scientists onboard observed a variety of marine mammals, saw sea ice growth in real time and found evidence of a healthy ecosystem despite warmer water temperatures from the summer.

Seth Danielson, a professor with the University of Alaska Fairbanks’ College of Fisheries and Ocean Science (CFOS), led as chief scientist. The first time measurements were recorded from the Bering Strait in November was in 1960, according to Danielson.

“After 1960 there weren’t any other cruises that I’m aware of, in the month of November, until 2011. And that was a cruise that Karen Ashton led. Since Karen’s cruise in 2011, there have been a couple more that have gone north in November. A couple of them did manage to sample some stations on the shelf (of the Chukchi Sea), the way we did. They did that in pretty warm years,” Danielson said.

This cruise, however, saw a much colder November in much of the Bering Strait and better sea ice conditions than in recent years.

Danielson presented his initial findings during a Strait Science presentation hosted by UAF’s Northwest campus at on Dec. 2. He was joined onboard the Sikuliaq by many other researchers, including Catherine Berchok of the Alaska Fisheries Science Center Marine Mammal Lab.

“I was surprised by how few bowheads and how many gray whales and humpbacks there were out there,” Berchok remarked.

Berchok was observing marine mammals from the bridge of the ship on a regular basis throughout the nine day voyage. The research team headed north from Seward on Nov. 7 and stopped through Nome on their return around Nov. 16.

They witnessed roughly a 20% or more increase in sea ice extent while in the Chukchi Sea during their trip, according to Danielson.

“Why we ever got a situation like this where it’s near freezing at the surface and warm near the bottom (of the sea). And the only thing I can think of is that it was the advection, the currents carrying ice over this region. And so ice did not form in place, but it must have been carried in,” Danielson stated.

Other scientists onboard the Sikuliaq were taking measurements from the Bering and Chukchi Seas to study water temperature, salinity and oxygen levels.

Southwest of St. Lawrence Island, there was a healthy amount of productivity for this late in the season happening in the Bering Sea ecosystem, according to Jackie Grebmeier, a researcher with the University of Maryland Center for Environmental Sciences.

“So there is still Chlorophyll,” Grebmeier said. “This is viable Chlorophyll on the bottom (of the seafloor) that can provide both food for consumption as well for microbial and carbon cycling. So it’s still going on into November although the values are about 50% less than what we have during the real productive times in July,” she explained.

Grebmeier, Danielson, and other scientists from the Sikuliaq are still compiling their final observations. The research team will publish more formal findings sometime in the next couple years.

Image at top: This picture was captured by Seth Danielson onboard the Sikuliaq as it traveled north in the Chukchi Sea during November, 2021. (Photo from Seth Danielson, in public domain via Facebook).

Posted in Climate & Environment/Science, News
← Driving ATVs on state roads comes with strings attachedNome Board of Education wraps up a successful year →