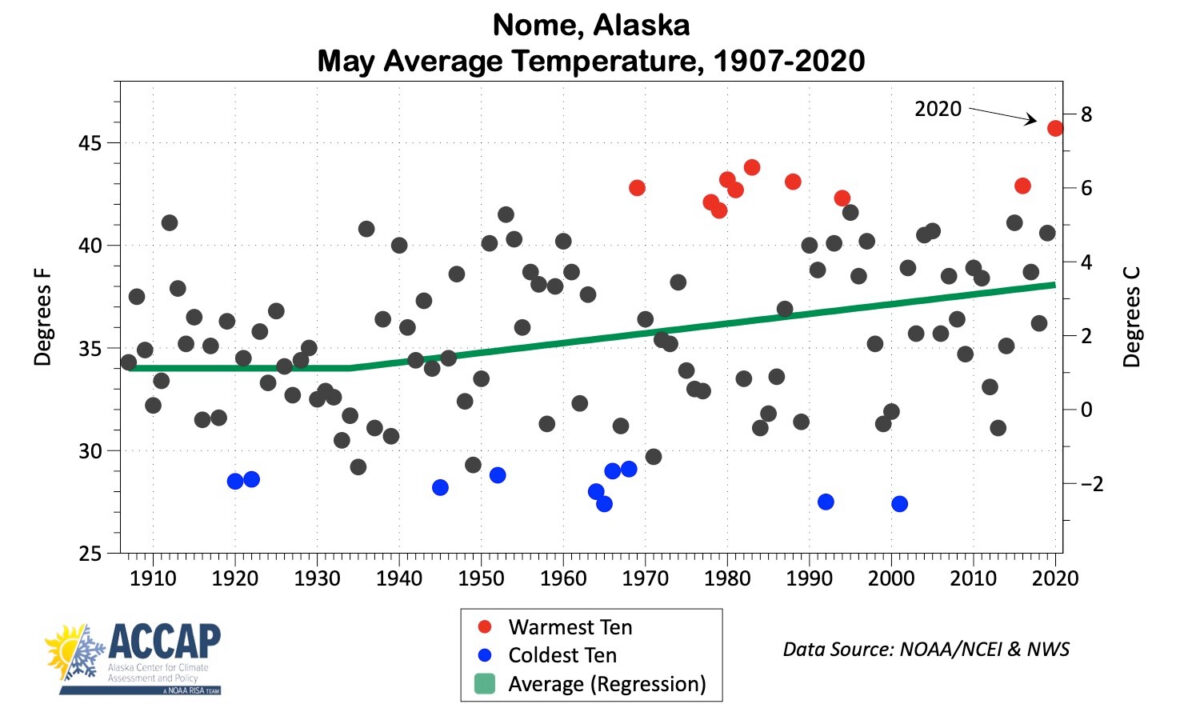 Nome residents have now experienced the warmest May in the city’s climate history. According to one climatologist, the average temperature of almost 46° (Fahrenheit) for the month broke the previous record from more than 35 years ago.

Rick Thoman is a climatologist with the Alaska Center for Climate Assessment and Policy (ACCAP). According to Thoman, the prior May record for Nome was set in May of 1983 with an average temperature of about 42.8°.

Thoman also notes that in recent years, May in Nome typically ends up 4° warmer than prior Mays from the 1930s.

This new climate record is the latest in a series for Nome over the past two years. In 2019 Nome had its warmest March on record, earlier this year the most rainfall for April, and now the warmest May, which also included Nome’s first May thunderstorm recorded at the airport in the past 15 years.

Along with several other records being broken, Thoman says this latest one is even more significant when considering Nome’s more than 100 years of climate data.

“So the fact that Nome is setting some of these records given the very long period of observation is really quite remarkable, and we can certainly tie a lot of it to changing sea ice and the warming Bering Sea; as well as, of course, the larger, global scale warming and changes in the winter storm track, that kind of thing.”

Within the last few years Nome has certainly seen these changes and effects from global warming, as noted during a record-breaking heatwave in July of 2019.

Still, the city’s daily temperatures can vary from cool to warm, from place to place within a couple miles of city limits, or even the coast, depending on one’s proximity to water and or the wind direction. Thoman says these variances were not taken into account regarding Nome’s average May temperature, as the readings from the local airport are the main ones considered.

“With the water still comparatively cold, for instance on the Northern Seward Peninsula (it) still has ice, right along the coast, right on the beach can still stay pretty chilly. Whereas, when there’s a warm air mass you don’t have to go very far inland, if the wind is not blowing right from the water all the way inland, (to) see big temperature differences.”

The Nome area saw an example of this over the weekend with temperatures ranging from upper 70s inland of Nome near Dexter, down into the 50s for the causeway in town and areas closer to the water. Similarly, Brevig Mission and Teller saw temperatures in the low 70s, while Wales experienced high 30s.

According to Thoman and NOAA’s Climate Prediction Center, Nome will more than likely experience a warmer than usual June this summer. For this week specifically, the Gold Rush City can expect cooler weather for a few days before a warm air mass blows through within the first couple weeks of the month.

Image at top: Graph of Nome’s average May temperatures recorded over 114 years of climate data. Photo/graphic from Rick Thoman, ACCAP, used with permission, (2020).

Posted in Climate & Environment/Science, News
← Dozens of Fires Pop Up in Southwest Alaska Due to Lightning Strikes, More to ComeCOVID Concerns Thwart NOAA and Other Researchers’ Plans to Study a Bering Sea In Flux →