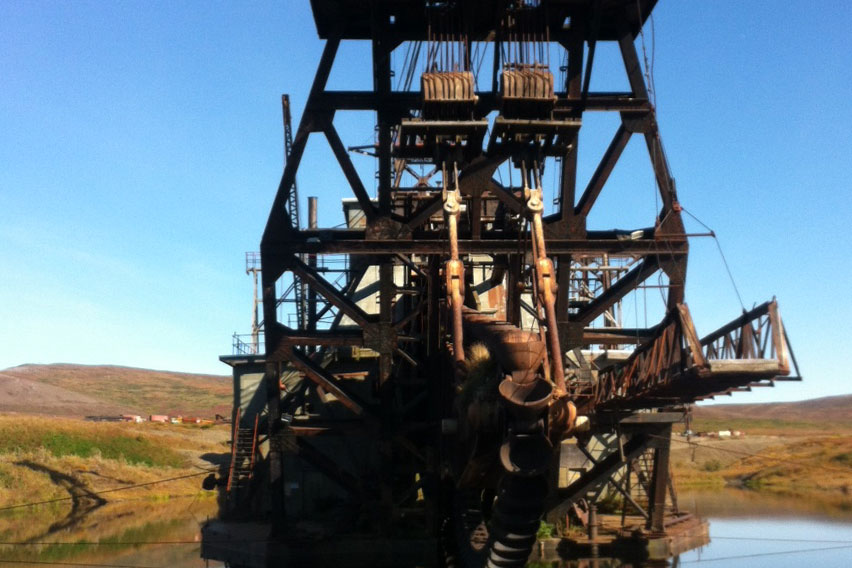 Tonight marks the premiere of the 9th season of Nome’s mining reality television show, Bering Sea Gold. With the promise of tapping into undiscovered riches, this season also comes with the backdrop of an ongoing lawsuit against one of Nome’s main mining companies.

Late last year (November of 2019), two Nome high schoolers filed a lawsuit against Arctic Sea Mining LLC for injuries they suffered during a previous run-in with one of the company’s dredges.

The incident occurred at the end of October 2018, when a pair of sisters, and their friend, were driving along the Port Road in Nome and struck a cable extended across the road. One end of the cable was attached to a construction loader, the other was attached to an iconic Bering Sea Gold dredge, the Myrtle Irene. That particular gold dredge, and Arctic Sea Mining, is owned by gold miner and tv personality Ken Kerr.

As of this month, the lawsuit is in the early stages of discovery.

Myron Angstman is an attorney in Bethel representing one of the young plaintiffs in this case. Since the suit was filed last year, Angstman says a third girl under the age of 18, has joined the suit seeking more than $100,000 in damages from Arctic Sea Mining. Although they haven’t decided on an exact number, there are a few factors that would determine the final amount the minors claim.

“One is the cost of out-of-pocket expense that have been generated by the accident, in this case that’s primarily medical…One of the second factors then is any future medical or counseling expense that may be involved and we have not yet determined what that might consist of… A third factor is whether there’s any future wage loss.”

Other factors Angstman mentioned that will be taken into account, are non-economic losses, which is described as pain, suffering, or loss of enjoyment of life; and whether or not there’s been an educational interruption based on the severity of the incident.

As the third party is also a minor, her identity is not being released by the court, however Angstman says she was a passenger in the truck during the 2018 vehicle wreck.

Ken Kerr has more on his plate aside from this lawsuit against his company. Nome-ites Shawn Pomrenke, aka Mr. Gold, and Emily Riedel will be vying against Kerr this summer to become the top gold miner in Nome. Here’s a clip of Pomrenke from a Discovery Channel video trailer on the upcoming television show.

“As soon as you think you’ve got the Bering Sea all figured out…it throws you a big curve ball.”

According to Distractify, an online entertainment publication, both Pomrenke and Kerr have their challenging encounters with the powerful Bering Sea during this latest filming season.

On the judicial side of things, Nome Superior Court Judge Romano DiBenedetto is presiding over the Arctic Sea Mining lawsuit which is being heard at the local courthouse. Angstman says if an early resolution is not agreed on, this civil case could take another year or two to resolve.

The latest season of Bering Sea Gold airs tonight on the Discovery Channel at 8pm EST.

Image at top: An old gold mining dredge near Nome from the ‘gold rush’ days. (This is not the Myrtle Irene) Photo from Zach Hughes, KNOM file.

Posted in News, Nome News
← Port of Nome Won’t Open Until End of May, Preparing for ‘Outside’ Vessel TrafficCity of Nome Says Travel Permits For In-Region Traffic Won’t Be Required Anymore →