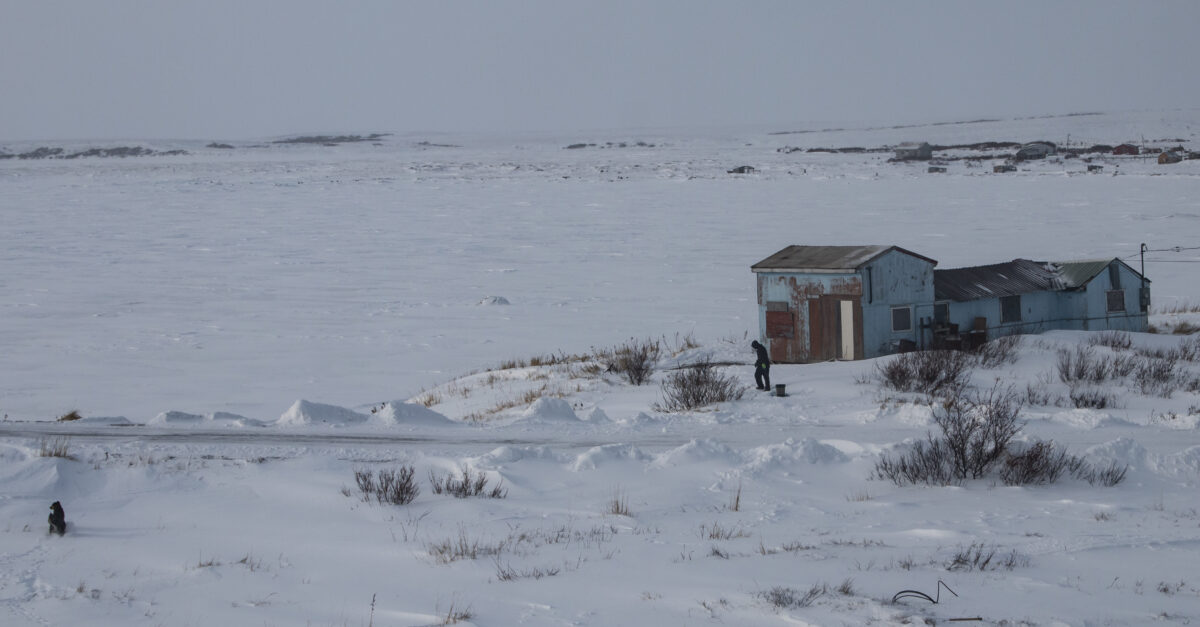 Many residents in the Norton Sound community of St. Michael have been without water and sewer for months, after the system suffered a partial freeze-up shortly before the New Year.

Frozen pipes, clogged sewer lines, and personnel shortages continue to be common issues for the village and other Western Alaska communities. Alice Fitka is the IRA President for the Native Village of St. Michael. She says some local families lost water and sewer on Christmas Day.

“December 27th, 2019. That’s when I quit having water. They (the neighbors’ pipes) froze before I did because they’re farther uphill. I’m down here. Once they start freezing and they lost their water and sewer it came down quickly to our area because it was really cold out (at) that time.”

Fitka lives in a small green house, a few hundred yards from the local IRA building. Beside her home sits a honey bucket, which she says has been overflowing because the city doesn’t have the resources to maintain it.

At the end of her drive, bulky metal pipes are joined to a steel culvert, which snakes along St. Michael’s coast and connects the village’s structures. This main sewer line, referred to as the “north loop,” services about half of St. Michael’s 400 residents, as well as the city hall and local high school.

St. Michael’s lead water and sewer operator, Norbert Otten, has been fighting to thaw the north loop for months.

“Well, it was a snowball effect, starting at the beginning of the year with a mop-head issue. The sewer was the first to freeze. South loop has a shorter loop, so I was able to catch that in time by adding heat through the heat exchanger.”

Otten has spent over two decades operating St. Michael’s system, but doesn’t have the firepower to combat a freeze-up of this size. Community members have more than once spotted Otten armed with a blowtorch, trying to thaw the north loop with no avail.

According to the city’s grant writer, Virginia Washington, contracting a utility company to repair the system could cost over $200,000. That price tag would more than deplete St. Michael’s emergency funds.

Financial support for projects is already sparse. Last month, the city had to call an emergency meeting because of complications with their bulk fuel storage tanks, which will cost about $1,000,000 to repair.

Seeing no other choice, community leadership made the difficult decision to wait for the frozen pipes to thaw naturally. Speaking to KNOM at the end of March, St. Michael’s Mayor Harold Hawkins expressed hope that the system would be repaired by the end of April.

“Well gee whiz, I’m hoping it should be running next month. We’ve got four weeks so we’re hoping to get that going next month (April). Provided the weather stays good like today (March 31st) we should be able to get it going.”

St. Michael’s water and sewer issues linger while the larger crisis of COVID-19 affects many across the region. Meanwhile, other Western Alaska communities are still without access to running water and sewer.

KNOM Radio plans to bring you more coverage of these communities and how they’re adjusting to local COVID-19 regulations in the coming days.

Image at top: A St. Michael resident hauls water to his house. A daily routine for those without water in the remote Norton Sound community. Photo from JoJo Phillips, KNOM (2020).