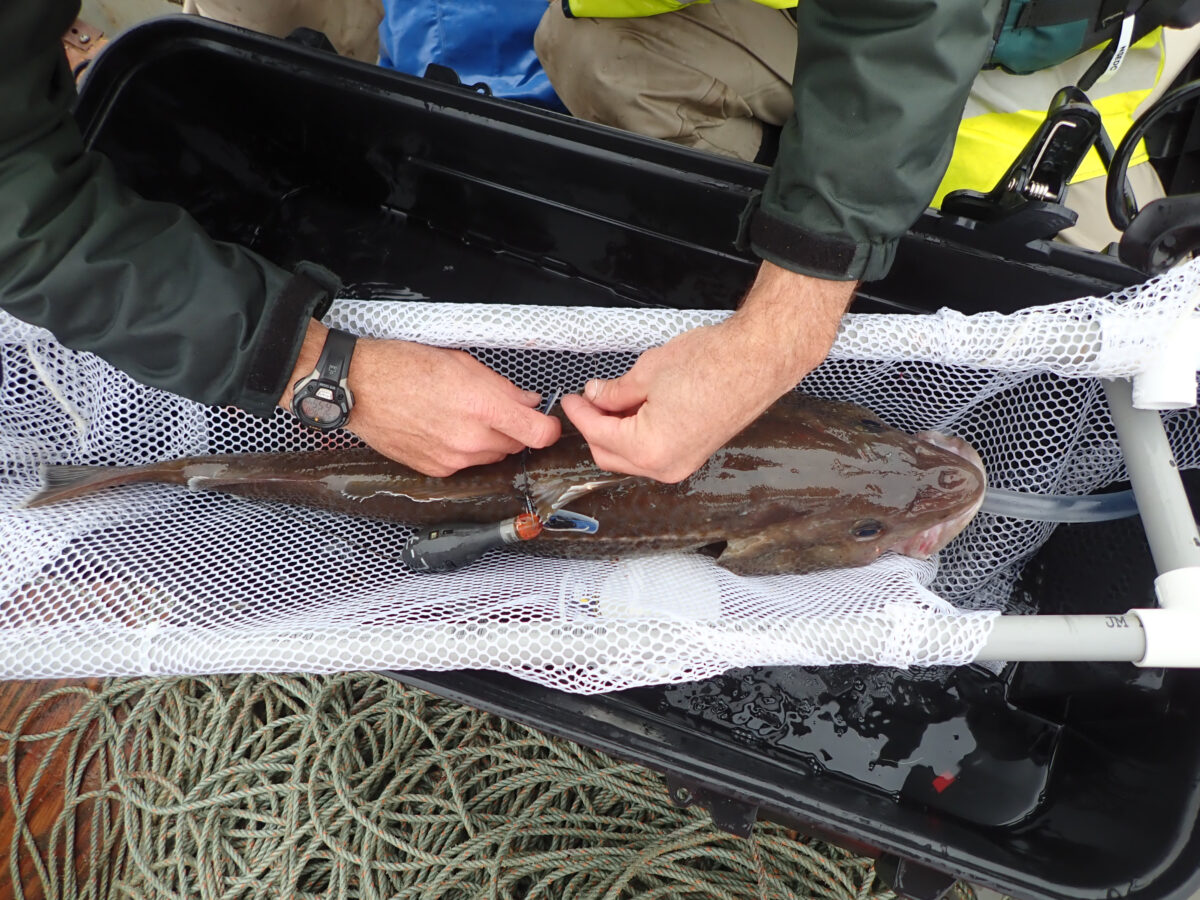 Researchers and Western Alaskans alike want to know more about Pacific cod’s movements as they swim from the Southern Bering Sea into the Northern. In a unique collaboration, National Oceanic and Atmospheric Administration (NOAA) Fisheries worked with fishermen in Savoonga to tag and track cod within the drastically changing Bering Sea ecosystem.

“And when you look at specific cod you see that it’s really in the middle of it all, and it is not just a predator of all the small fish, but when Pacific cod are small it’s a prey of other fish”

That’s Susanne McDermott, a fish biologist with NOAA Fisheries who studies the growth and distribution of Pacific cod in the Bering Sea. Based on her research, McDermott says cod can lay up to five-million eggs per fish, and their larvae thrive in an ideal temperature range of four to six degrees Celsius before they grow.

“And then when Pacific cod get large, they actually eat other large fish and they get eaten by marine mammals. So when there is a lot of cod in the water, the ecosystem is affected tremendously because they are a prey and predator, and they can change what happens in the ecosystem”

For this new kind of collaborative research project, McDermott and fellow NOAA researcher David Bryan teamed up with Norton Sound Economic Development Corporation (NSEDC) and commercial fishermen in Savoonga to catch and tag cod this summer.

McDermott says NOAA is hoping the project will help answer some of the key questions about cod’s movement in the Northern Bering Sea, near St. Lawrence Island, and if they can survive under the ice during the winter.

“My name is Itegnaq, Perry Pungowiyi and I’m from the village of Savoonga”

Fisherman Perry Pungowiyi says he would like to know where the cod are going as well, which is why he agreed to participate in this unique collaboration with NOAA.

“We’ve had elders tell us that they used to fill up their skin boats with halibut and cod, so the cod have been around but recently with all this climate change going on I was just interested in finding out what’s going on with the cod. They’re (the scientists) saying they might be migrating north to colder waters”

Pungowiyi has been commercial fishing for more than ten years, mostly for halibut and subsistence purposes, although he modestly says he’s not one of the better fishermen in his community. He and a few other Savoonga fishers brought the NOAA scientists onboard their 18-foot Lund boats during the summer fishing season while they were already checking their long lines for halibut.

Commercial fishing in Savoonga involves 1800-foot-long lines with 30 or more hooks per line according to Pungowiyi. And this summer, they’ve seen the majority of their hooks being filled with cod instead of halibut. Despite the numerous warm water fish showing up near Savoonga, Pungowiyi says it was a successful halibut season for him and other local fishers.

Only halibut can be caught and sold commercially to the fish plant in Savoonga, so local fishers don’t have much of a reason to keep their cod bycatch. That created the perfect opportunity Bryan says for NOAA to work with Savoonga to put satellite tags on pacific cod.

“They’re targeting halibut, but they’ve been catching Pacific cod for a number of years but right now they release them. So they’re not selling their cod, they’re not bringing them into the fish plant, instead they are taking them off their line and throwing them back in alive. And that is also a great opportunity for us to take advantage of these fish, put our tags on them, and just see where they are going”

According to Bryan the NOAA research project is tracking about 40 Pacific cod in the Northern Bering Sea with tags that will continue to gather data for a varying amount of time. Some tags will track the cod for 90 days then pop up to the surface for researchers to collect, while others will be in place for a whole year depending on how they are programmed. Bryan says NOAA’s satellite tags will be able to capture data on depth, temperature, directional orientation and more every five to ten seconds.

According to Lyle Britt with NOAA Fisheries, he wants this first-of-its-kind, collaboration model, to be implemented in other Western Alaska communities for future satellite tagging projects in the Bering Sea.

Image at top: Pacific cod like the one shown are showing up in large numbers in the Northern Bering Sea near St. Lawrence Island. NOAA, NSEDC, and Savoonga fishermen teamed up to put satellite tags on some of these warm-water fish. Photo provided by NSEDC’s Dawn Wehde (2019)