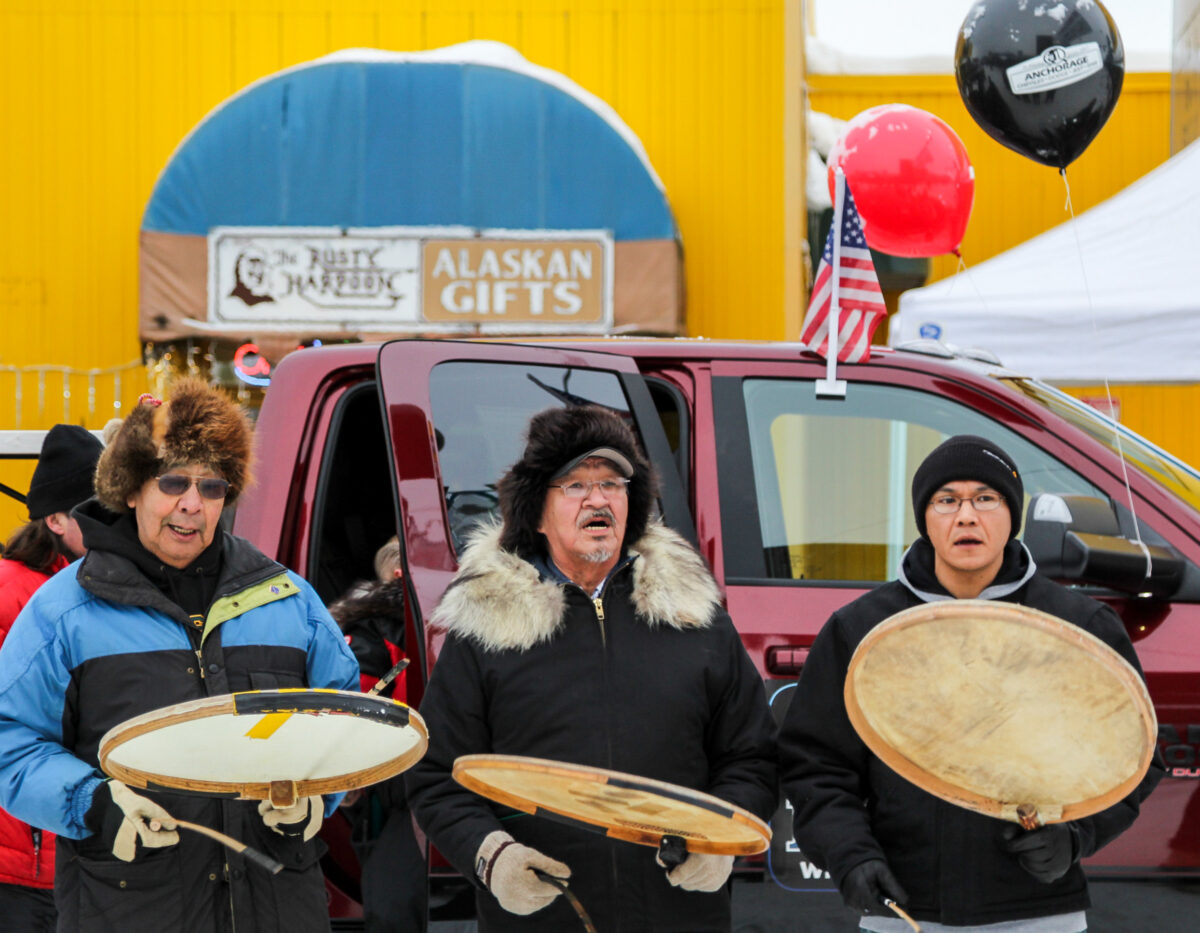 “Three, two, one, GO! The Iditarider is Michael Hayes from the great state of Oregon along with Richie Diehl, on his way to Nome.”

You just heard Richie Diehl of Aniak embark on the ceremonial 11-mile stretch through downtown Anchorage. Earlier in the morning, representatives from PETA — people for the ethical treatment of animals — set up a display next to the starting line. The group says the Iditarod inflicts unnecessary harm on dogs, and set up tombstones above five deceased-looking, stuffed huskies.

“These five dogs — Schilling, Groovey, Flash, Deacon and Smoke — all lost their lives within the span of one week during last year’s Iditarod.”

Tricia Lebkuecher is a campaigner with PETA. The group has long opposed the Iditarod, and for the first time ever sent a delegation to protest at the start. The small demonstration remained civil as tourists and passersby took photos, and disbanded later in the morning. The group has said it plans to have a presence at the finish in Nome, as well.

Protesters from PETA set up a display next to the ceremonial start line in Anchorage on Saturday. Photo: Davis Hovey, KNOM.

PETA’s presence is only one aspect of the controversy surrounding this year’s 1,000-mile sled dog race.

Andy Pohl, a rookie out of Knik who married fellow musher Kristy Berrington, says he hasn’t been focused on any of the hoopla.

“There’s controversy? I haven’t heard, I’ve been too busy training. It’s been a lot of enjoyment working with these dogs, and learning just about the sport of mushing over the last three years. I’ve always been an athlete doing stuff, but incorporating the dogs and the journey is what it’s all about.”

Even with the notable absence of past champions Dallas Seavey and John Baker, this year’s Iditarod field is considered extremely competitive, with many of last year’s top finishers gunning to be first under Nome’s burled arch. Among them is Nicholas Petit of Girdwood, who says he’s different from rivals like Mitch Seavey in that his race strategy isn’t mapped out ahead of time.

“Mitch has a plan, he won’t tell you. I don’t have a plan, I’ll tell you that. That’s the difference.”

One of them is Robert Redington of Willow.

“It’s going to be fun. You know, Joey’s spirit is so strong, I feel like he’s still with us today. Joey is very doggy, it’s awesome he’s honorary musher. He’d be proud and happy that all the Redingtons are still at the race start.”

Each year, the honorary musher carries bib number 1 among the field of racers. Bib number 2, this year, was drawn by Cody Strathe of Fairbanks, who left Willow at 2pm Sunday to kick off the 2018 Iditarod.

Image at top: An Anchorage-based drumming ensemble, singing a traditional welcome song from Wales ahead of the Ceremonial Start of the 2018 Iditarod. Photo: Zachariah Hughes, Alaska Public Media.