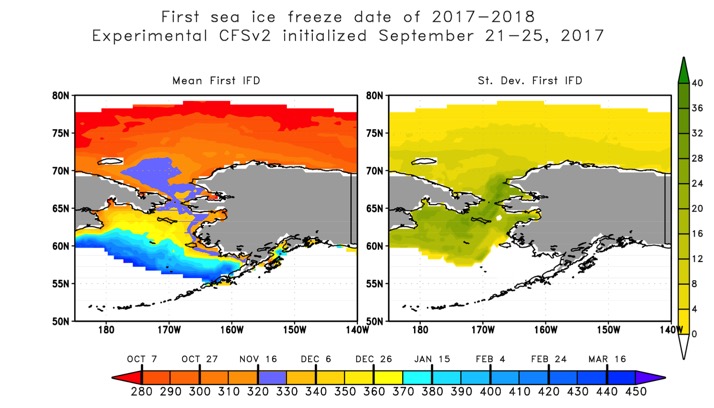 Climate scientists and meteorologists have confirmed the Bering Sea is warming, but they have also been studying other trends that may not seem as obvious.

Rick Thoman is the National Weather Service’s climate science and services manager for the Alaska region. Thoman has been studying weather and climate data in Alaska for more than 25 years.

According to the presentation Thoman gave at University of Alaska Fairbanks Northwest Campus on Tuesday night, the average annual temperature in Nome has risen from 26 degrees to 28 degrees in the last 100 years; however, Nome’s precipitation rates have not significantly changed.

Looking at ice coverage in the Bering and Chukchi Seas, Thoman says the data does not show a significant trend in the sea ice extent. But the ice’s thickness and timing is changing. It’s difficult to say how far the ice will reach and by what date, but according to NWS models, Nome’s offshore waters could see more than 15% ice coverage before December 6th — more likely, by November 16th.

National Weather Service observations show that, since 1900, water temperatures in the Bering Sea between June and August have been gradually rising. With that in mind, the NWS predicts a weak to moderate La Nina is possible in Alaskan waters this winter.

And if the past is indicative of the future, Thoman says there is an increased chance for above normal temperatures and precipitation in the early part of winter.

During the latter part of winter, Thoman suspects the weather will be significantly colder than the first half of the season.

Image at top: National Weather Service Models’ projections of sea-ice freeze up for 2017-2018. Image courtesy of Rick Thoman with NWS (2017).