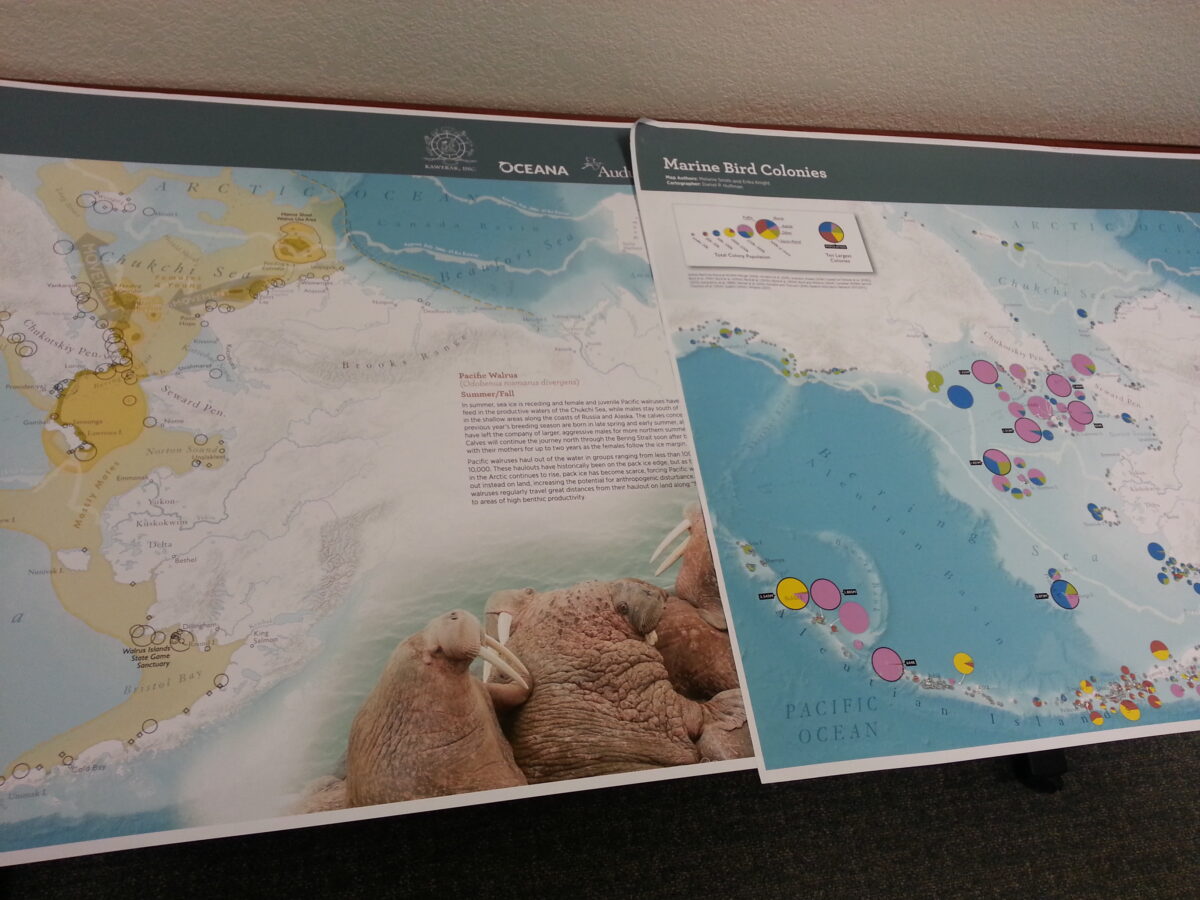 “In this atlas, what we do is let the data do the talking, so we don’t put (in) any recommendations: we present the data as-is. We make maps that are reviewed by the biologists to be an accurate representation of the species that is being mapped.”

That’s Arctic Marine Ecologist Max Goldman; he’s part of Audubon’s staff and spent years on this mapping project. Goldman spoke about the objective nature of the atlas during a Strait Science Series presentation in Nome on Friday:

“There’s a chapter at the end called conservation summary, (in) which we do take some stances and make some management recommendations, but we save all that for the end, so the meat of the atlas can be used as an unbiased, informational resource and a reference for people who want to know more about this area, and the many different resources, stories, and ecosystems and species that rely on it. We think the Arctic kind of speaks for itself that way.”

Goldman describes the effort of putting together this atlas in four main steps: finding data from various sources, organizing the information into a database, analyzing the data, and then designing the maps using composite layers and lots of colors.

According to Goldman, it took two years for Audubon to get to this point. He says they aren’t completely finished yet, as his team is now looking into the patterns displayed in this atlas, such as decreased sea ice coverage:

“One thing that we recognize is that we are putting all this data together, and in some ways, it’s just telling stuff that everybody knows already or, certainly, people who live in the area already know. But there is still value to being able to have that quantifiable, data-backed-up story, telling everyone: ‘Yeah, this is what these people know, and now, you can look at this map and see exactly why.’”

The maps included in Audubon’s atlas track seabirds, marine mammals, and even human uses such as vessel traffic. In order to gather data on all of these animals, Goldman and his team spoke with regional entities like Kawerak about their traditional knowledge, as well as Western Alaska subsistence users, who Goldman regards as local experts.

Audubon’s hope, Goldman says, is that policy makers will use this Atlas and the data from local experts to make decisions on issues like drilling in the Arctic. Goldman reiterated, “what we’re hoping the data will do is allow people to have a resource, make a decision, or use these maps to reinforce their thoughts or their stance.”

Goldman says Audubon has and is participating in the Bureau of Ocean Energy Management’s outer continental shelf leasing program and five-year plan.

Before this ecological atlas was released, Audubon put out an earlier version in 2010. According to Goldman, Audubon plans on releasing another updated atlas about 5 years from now.

Image at top: Some samples from the newest ecological atlas of the Beaufort, Bering, and Chukchi Seas. Photo: Davis Hovey, KNOM (2017).

Correction: An earlier version of this story misstated the specific BOEM program in which Audubon Alaska participates. The error has been corrected. Audubon participates in BOEM’s outer continental shelf leasing program and five-year plan, but Audubon is not involved in the public comment period for BOEM’s EIS on Hilcorp’s proposal for a Beaufort Sea gravel island.