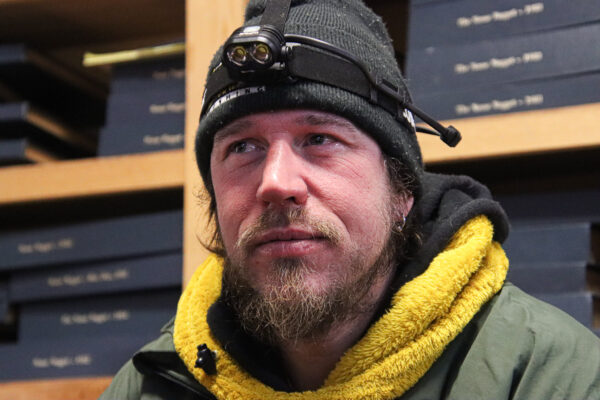 Brent Sass looked like he had a comfortable lead Monday night over Dallas Seavey, heading into his final Iditarod run from White Mountain to the Nome finish.

But then came the wind. Fans watching the online tracker saw Sass’s GPS stopped in the middle of a treacherous run over the Blueberry Hills in 60 mph headwinds, as Seavey’s tracker inched closer.

Sass described what happened next in an interview on Tuesday, after sleeping a few hours after winning his first Iditarod.

He said mushers were told of a windstorm ahead. But with his buffer over Seavey, he wasn’t too concerned. Thinking back now, he should’ve been.

Brent Sass: It was windy and it just got progressively worse the more we got into the hills. Once we started climbing it was no visibility really. You couldn’t really see the leaders – you were just relying on them staying on the trail. It was literally like there’s a trail marker and then I’m just like, hopefully we’re still going in the right direction

That was when the real challenges really started to happen. We got up in the hills and trails are a little bit drifted to the side. And so you’re side hilling and the wind is coming from that side and your sled is acting like a parachute or a sail at that point.

I was fighting it and I had broken runner from the night before. The actual metal – the aluminum part was cracked in half – but luckily there’s a piece of plastic over the top in that area right below my foot basically, that makes it so even if it does break it still holds together. The runner was still somewhat functional, but I couldn’t put a whole lot of pressure on that runner because I didn’t want to bust that and if I busted that then I would have been really screwed.

So I was trying to drive the sled on the side hill with a 50 mile an hour wind with the pressure on one runner which was not very much fun. We kept going and it was great. And I was so proud of the dogs. I mean they were just charging into it – it was amazing. They did not hesitate at all. They were listening through the wind. I was yelling commands to ‘gee’ and ‘ha.’ If I said gee a little bit they would just go a little bit and they were just perfect as far as commands.

It was a fun go until one of the side hills and a wind gusts up real high and it caught me and I got top heavy and we just tumbled down off the trail into the abyss. I probably barrel rolled like three or four times. Luckily I didn’t hit anything in the process or lose any of my gear.

We didn’t go far but the problem is I went and then all the dogs got drugged down with me. So now the dogs and I are just in a big pile not very far off the trail – I hoped, but you really have no bearing on how far you’ve gone because you can’t see anything.

I finally got everything stopped and the dogs immediately bunkered down in the drifts that are already coming over the top of them. I’m like, ‘What do I?’

I felt like I was gonna see Dallas’s headlamp go by just 30 yards off the trail. I was bunkered down there and there was probably a minute – maybe 30 second –  where I thought ‘I don’t think that we can turn us around fast enough in order to get us out of this. I just took this video, and I think I just slapped myself in the face and was like, ‘What are you talking about? We’re gonna get our asses back to that trail right now and get to Nome. There’s no way around it.

I look up and there’s the trails gone. I don’t really have any bearing of which way the trail is or where the trail is at all. I turned a headlight on in my handlebar so that I could see the sled because if you walked away 10 feet, the sled was gone.

I walked in every direction a little ways and a gust would come up and then it’d be a little bit of a lull and you hope that you just get a reflector on a trail marker.

I found the trail that way, but now I’ve got 11 dogs who are literally bunkered down in the snow drifts. Their faces are totally drenched in snow like I’m while I’m like cleaning their muzzles off because the snow and ice are just like just starting to build up everywhere. Their eyes are all frozen shut.

One of those times I did a backtrack up maybe, maybe 25-30 yards and, and the sled went out of sight but I had been pounding my foot into the hardpack so that I had some bit of trail that I could follow because if you just walk normally their trail was gone immediately. I knew that if I get too far away, I wouldn’t go see the headlight on the on the handlebar either

Now I’m thinking ‘How am I going to get these guys turned around, and get back up to the trail? They got drugged backwards through the chaos. I just was talking to the dogs and got them all stood up and I kind of drugged the gang line around and got the sled turned back so we were pointed back towards the trail.

At that point like the Iditarod Insider guys that were following me had come back and they were standing there above me. I was like ‘do not touch me,’  because I want to stand for me. I’m fine right now – I’m not in any sort of dire straits other than I need to get this dog team back on the trail before Dallas Seavey comes mushing by. Like, it wasn’t a life or death or survival thing, it was beating Dallas Seavey – that’s all that mattered at that point.

I got them all but three of the dogs, who are like running backwards. At that point, all I could do is just be as Zen as possible and not get upset with them, because if you got upset with them at that point, they would just bunker down even more. A 50 pound dog weighs 300 pounds if they want to in those situations.

So I just went through and talked to them all and – I yelled at them all basically because the only way they could hear you is if you’re yelling because the whole time you just have this rumble going –  the wind’s blowing out of control. I got the leaders, Morello and Slater all lined out, they’re all facing the wrong direction. And I’m going through them lifting them up and putting them forward in their spot. And they keep turning around and come back down there for maybe 10 minutes 15 minutes. I’m just like constantly doing that and eventually like they all get it that ‘Okay, we’re gonna go that direction.’ I’m just trying to talk to him as calmly as I can.

In the end, they trusted me. I got really lucky – really lucky. I was up there pulling the leaders yelling ‘Come on guys!’ and all of a sudden a light went off and they all just started pulling. I got up to where I was standing on the trail. Once I got them up there they were like ‘Let’s get out of here.’

They totally still got it and then it was up to me to just keep the sled from tumbling down the mountain again. Luckily this was all happening not very far from getting down to the shelter cabin. I didn’t know how far I had to go through this in order to get out to some safety.

We made it then there’s a last bit of pretty bad sidehill and I finally got to the position where I could be leaning over the handlebar and pushing down on the the handlebar instead of on my foot on that runner so I could use that runner without putting a bunch of pressure where it was broke to try and keep the sled pointed up so it didn’t go down again.

My arms are sore. They were sore from the race but they’re really sore now from that ordeal. We got up to the top soon and we kind of crushed it. I looked, I could see that that was the coast already. There’s only maybe 10 or 15 minutes and we were there.

It was a huge relief and I was pretty sure that Dallas hadn’t come by. We got down to the shelter cabin and sort of regrouped and snacked the dogs.

I messaged my buddy, Mike Ellis, on my inReach who I had been in touch with for a good portion of the race giving me updates here and there. He just said ‘Dallas is 11 miles behind you and moving, so get your ass in gear. Get out of there.’ I’m thinking, ‘God, I gotta get out of here right now cause I didn’t know what it was gonna be like on the coast. Like, I didn’t know if it was gonna be more of that blowing snow stuff.

Then the coast run was just simple. Yeah, it was blowing and snow and a little bit of moving snow. But in the end, it’s level ground there so it felt like a cakewalk.

If I hadn’t lost my footing. And had the wind blowing me over, we would have cruised right through all that without any issue. So it was definitely my fault that we went off the edge there, but luckily, we were able to pull out of there with just enough time so I didn’t have Seavey right on my tail. But I gave up half my lead basically in that hour or whatever that I spent trying to get myself situated.

The whole time I was like, ‘Yep, here we go, pulling a Sass again, making it interesting, and the last leg of the frickin race every single time.’

Image a top: Brent Sass talks to reporters at the offices of the Nome Nugget after his first Iditarod win. (Lex Treinen/Alaska Public Media)