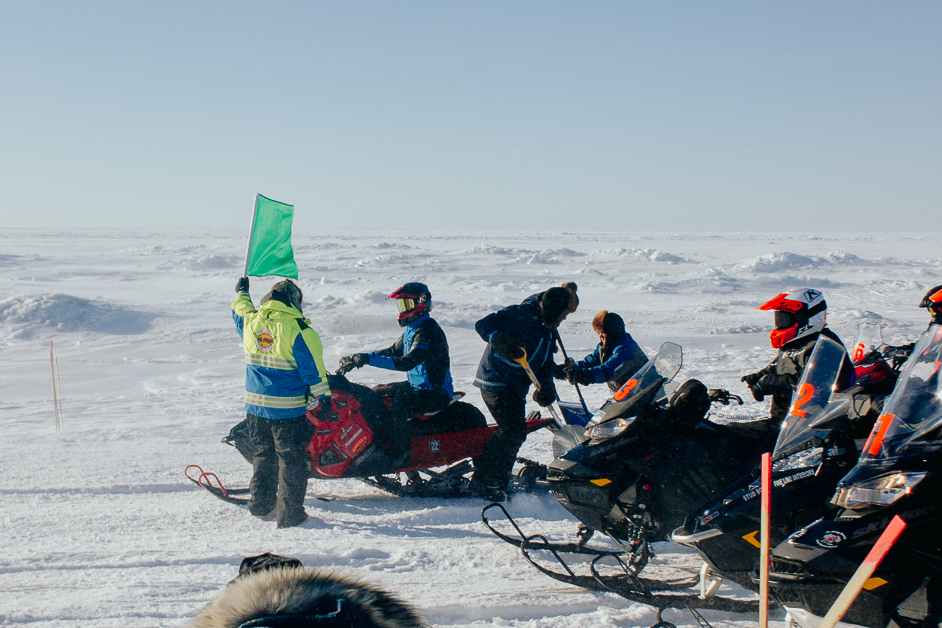 This year’s Nome-Golovin champion was open-class racer Tre West, who finished with a time of 2:05:50. West has been racing in the Nome-Golovin since he was 18, and has competed in other regional snowmachine races as well — he won the Archie Ferguson/Willie Goodwin Sr. Memorial Snowmachine Race in 2018.

Forty-seven racers accelerated off the Nome-Golovin starting line, but only half of those made it all the way to the finish. That’s a fairly typical scratch rate for the Nome-Golovin, Race Manager Kevin Bahnke said. The race trail this year started out pretty smooth but didn’t stay that way, according to fourth-place finisher Jarvis Miller.

“It’s smooth from here to Topkok. After that it turned into that ice — that wind did a number on the snow. There’s no forgiveness in ice and there’s really no strategy. You’ve just got to sit down and hang on,” Miller said.

This year’s race wasn’t without incident. Women’s-class racer Richelle Stasenko got into a wreck about 25 minutes into her run and had to scratch. Two snowmachines caught fire during the race, and open-class racer Joe Fullwood was helicoptered out of Golovin after a bad wreck. Fortunately, no one was hospitalized.

In addition to those prizes, the winner of each class received 50% of the registration fee money for that class, second place received 30%, and third place received 20%. As overall winner, Tre West also received two ounces of gold.

Click below to hear portions of KNOM’s live coverage of the start and end of the 2022 Nome-Golovin race from Nome:

Image at top: A racer waits to accelerate off the starting line at the 2022 Nome-Golovin. Photo by Ron Sloane.