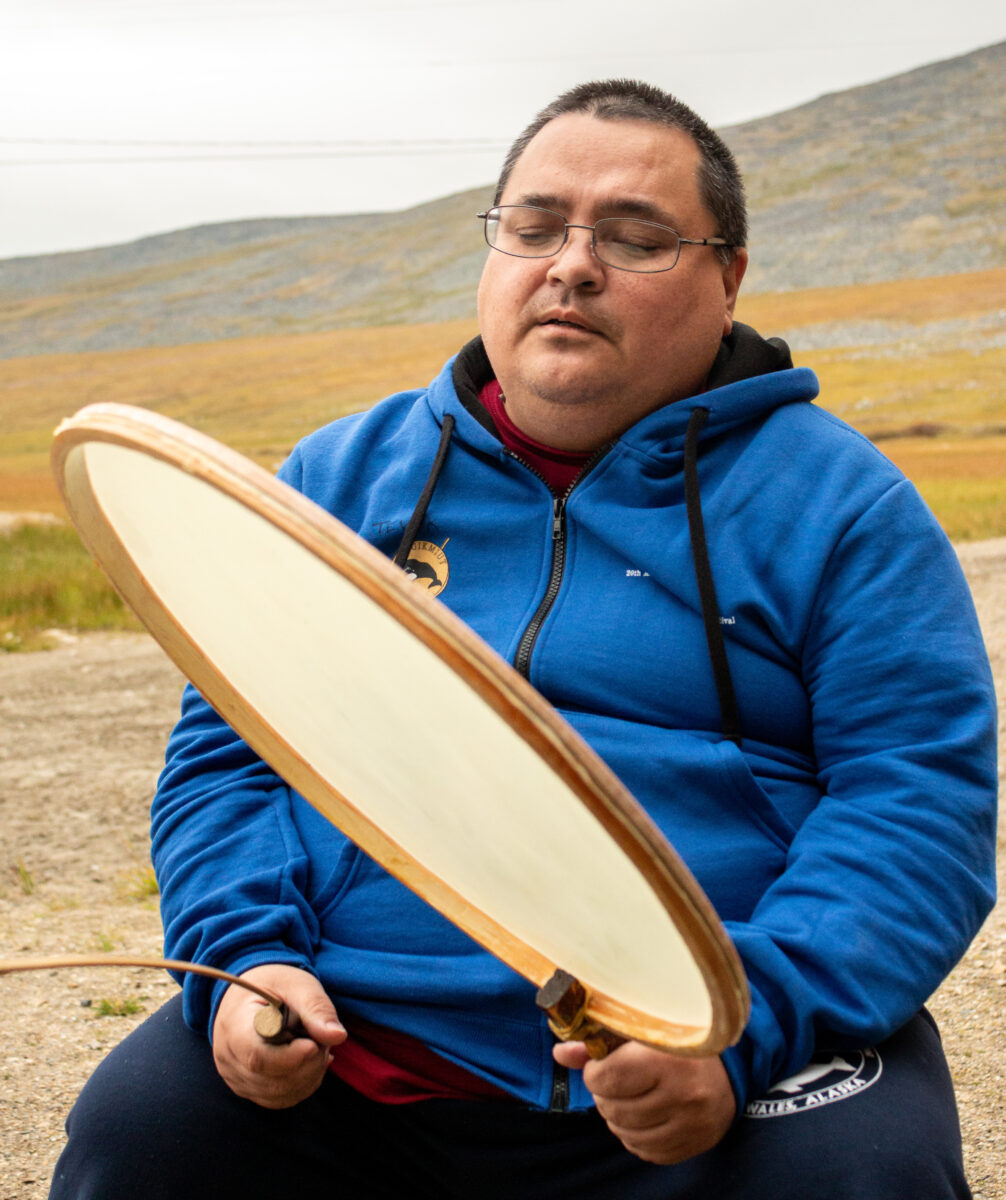 The 20th annual Kingikmiut Dance Festival took place in August, with six dance groups attending. The festival has provided an opportunity for friends and family to reunite in Wales at least yearly since its inception in 1999.

KNOM’s Joe Coleman attended the three-day festival and has this report:

“It brings people together: families, friends. It keeps our culture alive. It lets the younger generations hear the drumming and the dancing…”

That’s Stanley Oxereok, one of the people helping set up the 20th Annual Kingikmiut Dance Festival in Wales. Dance groups from Wales, Diomede, and Point Hope were represented, as well as Anchorage, Savoonga, and Shishmaref.

For many regional residents heading to Wales, this is an opportunity to engage with their traditional drumming and dancing while simultaneously catching up with family and friends.

But for Roy Roberts of the Anchorage Kingikmiut Dancers, the festival is more than just that. He says that going to this year’s Kingikmiut festival was his way of honoring his mother’s memory.

“And then, I just lost my mom, and that’s actually how I got here, because I wasn’t gonna come. I was too busy taking care of her. When she suddenly left, it opened up the door for me…”

Roberts and his Anchorage group were well-represented, but that could not be said for all the dance groups. For reasons unknown, Point Hope only had one member attend the festival, when originally the group had chartered a plane for their trip to wales.

“I just envision him on that plane all alone – it’s a nineteen-seater – all alone. That is some real dedication, and that is how much he is moved, that’s he’s going to go to that length to come. And he knows we got his back, he knows we’re gonna help him out.”

Roberts has his own level of commitment to being a member of a dance group. He says he realized how important it was to him after taking a six-month break.

“Because there was times when I didn’t dance, and that’s when I felt very empty and very no-purpose, so during that time away, I realized that it’s my life’s work, and I just gotta keep going at it…”

Roberts isn’t the only one whose identity is found in drumming and dancing. Anna Oxereok, tribal president of Wales, speaks about what the festival means for her community.

“Healing. Having talks like Richard Atuk and Samuel Johns. Having presenters that have that positivity, to bring us back, uplift us back. And a lot of hard work. I will never ever quit thanking the people behind the scenes; there are so many.”

Oxereok spent much time planning for this event, in the midst of water and sewer problems that persisted in Wales even two days before the festival started. She says that this year’s festival was close to being rescheduled, or even cancelled. The man who made the final decision to hold the Kingikmiut Dance festival was someone who had not attended the cultural event recently.

“For quite a few years, I was sitting on different boards. I missed quite a few over the years; this year, I happened to be home. Probably the last four or five of them, I was traveling.”

That’s the Mayor of Wales and brother of Anna Oxereok: Frank Oxereok, Jr.

Mayor Oxereok says it’s important to him to represent his community, even at the expense of occasionally missing the festival. This year, however, Oxereok is delighted he didn’t have to choose one or the other.

“Being the twentieth anniversary, that’s kind of exciting, you know? And it’s twenty years already gone by…”

For drummers, dancers, and behind-the-scenes workers alike, the end of the festival’s second decade allowed for a Western Alaskan reunion once again.

Image at top: Roy Roberts has performed traditional music since 1985; he’s been a member of the Anchorage Kingikmiut Dancers and Singers since 1992. Here, he sings a song he wrote for his grandparents about chopping firewood. Photo: JoJo Phillips, KNOM.