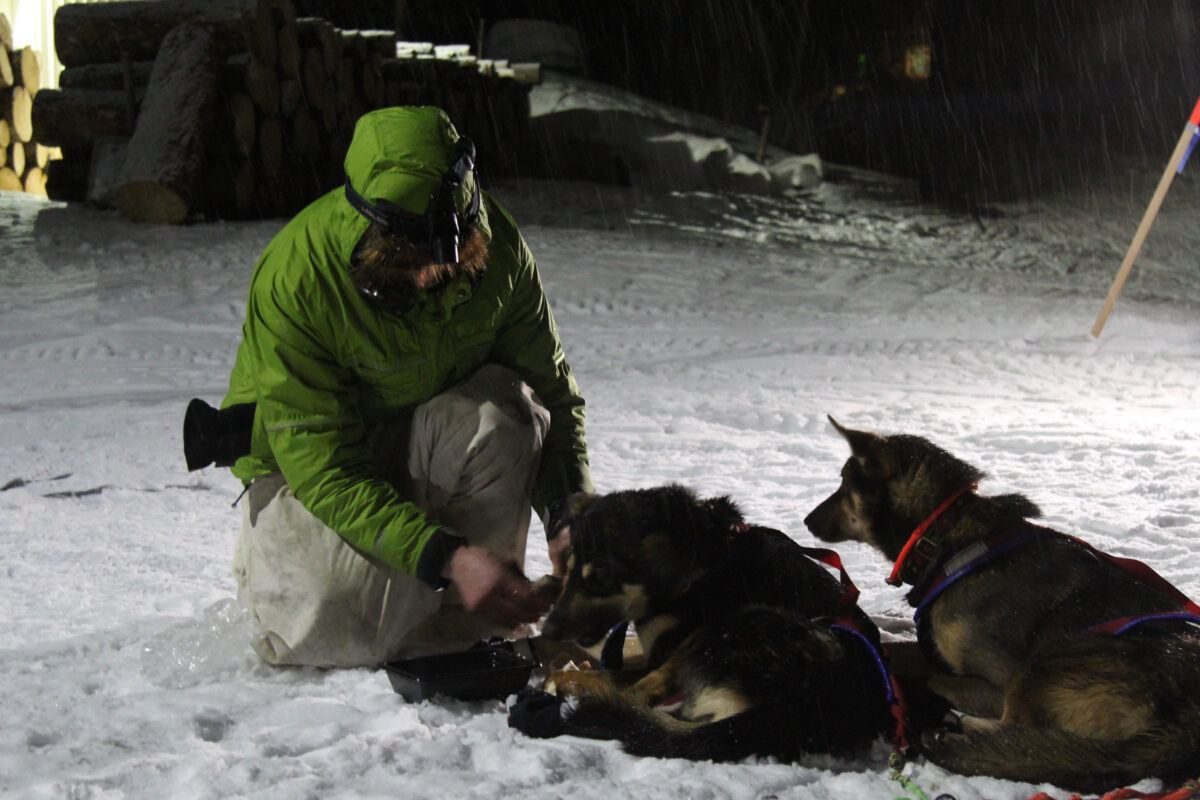 Nic Petit was the first musher to reach the Yukon River, arriving in Anvik at 4:23 a.m. Friday morning. It earned him $3,000 and a meal prepared by chefs flown in from an Anchorage hotel.

Mushers are required to take an 8-hour rest along the Yukon, and Petit debated taking his in Anvik before opting to push ahead after a few hours break. Alaska Public Media’s Zachariah Hughes reports.

The sound of barks and bells welcomed Nic Petit to the small town of Anvik.

Petit parked his team and immediately began to methodically water and feed them. He was extremely focused, walking up and down the gang-line, giving the dogs bacon, chicken, and piles of kibble poured right on the snow.

Unlike previous years, Petit has mostly blown through checkpoints, opting instead to rest his team along the trail.

“How’s it been for you, camping outside of checkpoints this whole way?”
“I didn’t have to deal with this. No offense, but we’re tired people and we got a lot of work to do.”
“Is it more for you, or more for the dogs?”
“The both of us.”

The ride to the Iditarod checkpoint was rough. With barely any snow, and vicious tundra tussocks that kept nearly bucking him off his sled.

“That was the roughest trip to Iditarod I’ve ever been on. Jokingly saying to myself we were at Tussock Level Number 5, probably close to the high rating, you know.”

Even with a group of reporters, vets, race officials, and spectators, Petit was so focused on his dogs that his baggy over-white pants kept falling down to his knees as he walked up and down the line. He seemed to hardly notice until the task at hand was over and would hike them back up to his belly, until they dropped again.

In the Tribal Hall next to the checkpoint, Petit sat down at a folding table to a five-course meal of steak, scallops, salad, and bison chili prepared over two camp stoves.

Petit left dinner for a nap but didn’t sleep long. He left Anvik after about four hours.

Weather along the Yukon has been messy. As the next wave of mushers came in, race judges had to give Jessie Royer and others the bad news that, for the second year in a row, there were problems getting supplies to the checkpoint at Eagle Island.

“Did you hear they don’t have the food to Eagle Island yet?”
“Oh, I just asked in Shageluk, and they told me they did. There’s no food?”
“As of right now, but they’re making the effort to bring it down from Kaltag by snowmachine.”
“Because I’m doing my 8(-hour layover) in Grayling.”
“You might want to grab a bag.”

While there was straw and fuel available, Iditarod crews were trying to carry in mushers’ drop bags with food and other supplies. Last year, weather shut down Eagle Island, prompting mushers to load up supplies for the long run between Grayling and Kaltag. With a similar situation, some mushers are having to adjust their plans on the fly as they begin moving north up the Yukon.