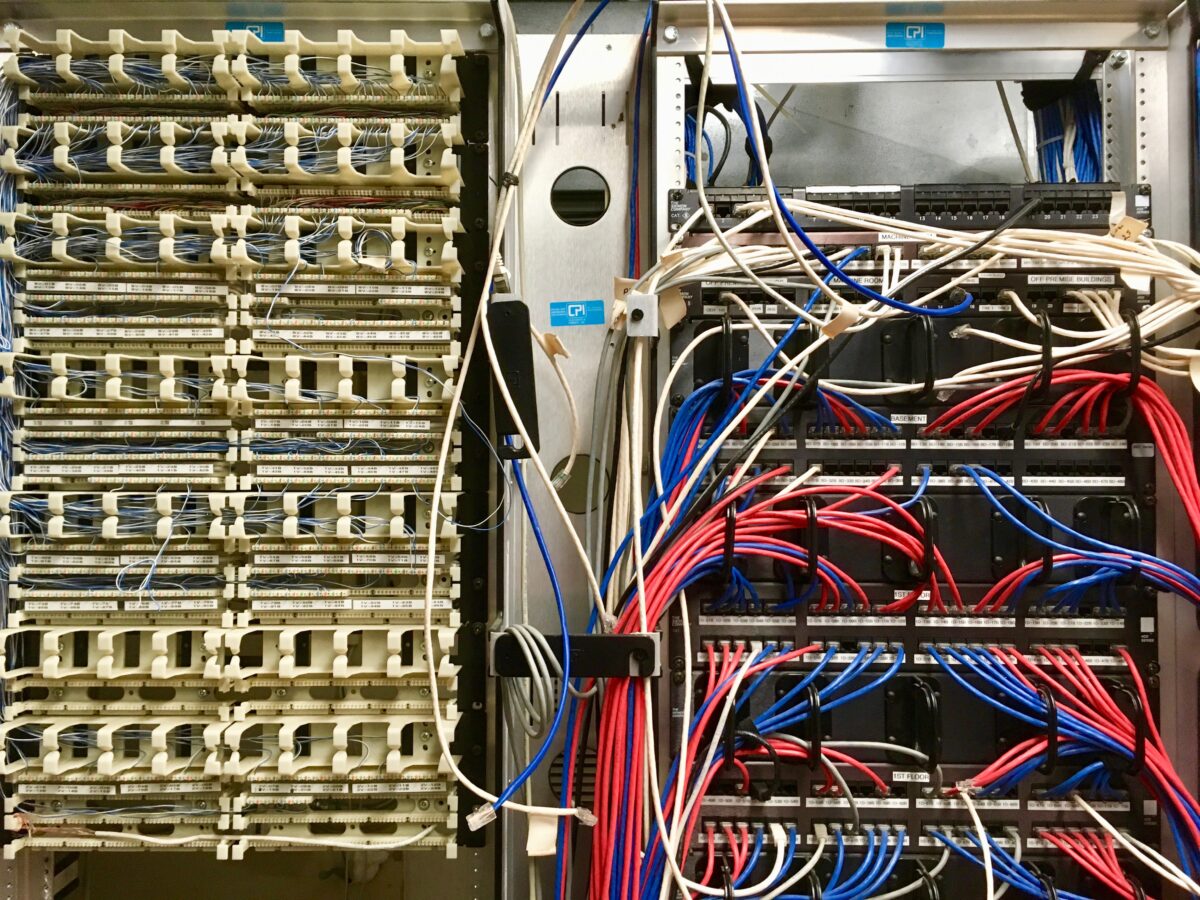 Residents of Nome continue to wait to access high-speed internet through Quintillion’s fiber-optic cable, though a handful of business customers are now connecting to it.

The system came online in northwest Alaska on December 1st, and Nome’s residents are the only ones waiting out of the five communities that are on the cable, including Kotzebue, Point Hope, Wainwright, and Utqiaġvik.

On this episode of KNOM Profiles, we get the latest on who in Nome has Quintillion now, which providers are in talks, and who else is thinking about signing on.

In 2012, the Anchorage-based telecommunications company Quintillion announced its plans to build a 1,200-mile undersea fiber-optic cable from Prudhoe Bay to five coastal communities in northwest Alaska, connecting them into the company’s road-system network.

Quintillion said the fiber-optic technology could allow for internet speeds up to 16,000 times faster (100 gigabits per second vs. .006 gigabits per second) than current satellite or terrestrial tower-based broadband service in Nome and Kotzebue.

Initially, the targeted turn-on date was 2014, but a series of delays meant the cable wasn’t completed and operational until December of last year (2017).

Kristina Woolston is Quintillion’s vice president of external relations. She says there have been few problems with the system since the launch.

“We’re pleased that for two winters now our system has performed flawlessly, and we don’t expect that to change. We’ve spent an awful lot of time and resources on installing and engineering a system that is both resilient and will stand the test of time, and we’re excited about where we’re at right now.”

But Quintillion is only the owner of the infrastructure; it doesn’t sell cable bandwidth directly to customers. Instead, third-party providers — companies like GCI, TelAlaska and AT&T— can purchase capacity on the cable and then sell it to customers.

These providers negotiate with Quintillion on price, packaging, and other logistics. And until deals are finalized, non-disclosure agreements often prevent information about the negotiations from being released.

Woolston would not give specifics about any talks Quintillion is having with providers.

“Every community is unique, and every provider is unique, and I can’t speak to the nature of the conversations we’ve had with providers, but I think it’s worth noting that Quintillion has made wholesale capacity on a broad base, either from large capacity down to very, very small capacity offerings to multiple providers, and we’re getting close.”

She says Quintillion’s pricing is “significantly lower” than terrestrial or satellite service.

One provider that has confirmed business customers in Nome is Alaska Communications System (ACS). Heather Marron, ACS manager of corporate communications, says the company has been providing business service to Kawerak, Inc., since January 15th, and is also now serving one other organization in Nome; but she declined to specify that organization, saying ACS had not received permission from the entity to release its name.

Besides the two organizations served by ACS, Nome Public Schools (NPS) switched in March from GCI to Quintillion fiber-optic service through Leonardo Diagnostic/Retrieval Systems (DRS), which primarily serves military clients. NPS IT Director Jacob Phillips could not be reached for further information at the time of this story’s airing.

The University of Alaska–Fairbanks Northwest Campus is also now online with Quintillion fiber service as of May, through AT&T.

Northwest Campus Director Bob Metcalf says it’s an upgrade for administrative staff, who have to exchange a lot of information with the main campus in Fairbanks.

“Whereas sometimes they’d have to wait for screens to refresh and be ready for the next entry, it was a lot quicker.”

He says he’s hopeful the fiber-optic internet will make it easier to connect to UAF teleconferences and events around the state. But he says video streaming still isn’t that much quicker.

“It was better, I’m pretty sure, than what we would have been getting on the satellite. But it still buffered, and it would still stall. Not so much that it was what we would do in the past, and just say, ‘Agh, this is no good,’ and just disengage, but still not seamless.”

And Metcalf says they’re also conscious that the campus serves a lot of people outside Nome who still don’t have great internet access.

“Still, a lot of our students and a lot of our communities that do rely on the old satellite connections, or, now, it’s cell service. (We want to make sure) that we’re still staying connected with them and provide access that they can actually use. So, we don’t want to leave anyone behind.”

The City of Nome — including Nome Joint Utility System (NJUS) and the Nome Police Department — is also set to go online with Quintillion fiber service, by the end of July.

And as of right now, none of the major providers have plans to do that, either.

GCI has not signed on to provide service through Quintillion, even for businesses. Last year, GCI completed its own telecommunications project: the 300-million-dollar TERRA ring, or Terrestrial for Every Rural Region in Alaska. TERRA provides high-speed terrestrial broadband internet to 84 Western-Alaska communities, from the Northwest Arctic to Bristol Bay.

In January, Quintillion’s Woolston said the two companies were in discussions, but GCI’s director of corporate communications, Heather Handyside, wouldn’t confirm whether those have continued or if anything has been decided.

“We are always open to working with companies and partners to deliver service, and that depends on the reliability of the service and cost points and if it is affordable for our customers. So if it looks promising, that’s always a potential in the future.”

Representatives of another telecommunications provider in Nome, TelAlaska, could not be reached for information about negotiations with Quintillion.

ACS spokeswoman Heather Marron says her company doesn’t have any definite plans to expand into residential service in Nome. When pressed for more specifics about whether Quintillion’s infrastructure is being considered, she responded:

“We’re always looking at ways to economically expand our network.”

Another company looking to expand its services is Trinity Sails and Repair (TSR), an automobile repair shop in Nome.

“We’ve got this game-changing, impossible thing: We have fiber-optic in Nome, Alaska, where all the way down the west coast there are towns much bigger than us that don’t have any chance of getting fiber-optic. And we have some big players in the game that are well-established here, but they’re not accessing it.”

So he’s trying to break open the market, but he says there’s a catch:

“Right now, nobody wants to go first. Because the person that goes first is going to set the standard, the price, and then everyone else is going to cut them down by a little bit.”

Another stumbling block, Trowbridge says, is that because of the location, Quintillion doesn’t have the ability to scale up the connection: They want the full subscriber money up front, money he doesn’t have.

So as a workaround, he says he’s buying business service through ACS or DRS, and planning to start offering a few residential connections to Quintillion’s fiber to people he knows personally. He wants to see how that goes for now as he continues to negotiate with Quintillion itself.

But he says for Nomeites dreaming about super-cheap and super-fast internet on Quintillion:

“I’ve been in the number-crunching sessions with some pretty big players in the game, and the reality is that what you’re paying — in the $150 to $300 range for internet — probably isn’t going to change. What will more likely change is that speeds will go up, and your limitations, your caps, or how much data you can actually use, will go away or it will also go way up.”

But Trowbridge estimates that there might not be any residential fiber-optic internet plans in Nome for 18 months.

Meanwhile, Quintillion is moving forward with plans to build more undersea cables to Tokyo and London, and also says it’s looking at expanding the cable into “a handful” of additional communities in Western Alaska. Spokeswoman Kristina Woolston would not comment on which ones.

“We have always said we intend to connect to other Alaska communities as we develop our international paths, and that has not changed. And we look forward to making some announcements here in the near future.”

Woolston emphasizes that the company is actively working with providers to iron out agreements for residential service. But neither she nor providers would give a concrete timeline for when those deals might be announced. TSR is so far the only company to even confirm that a path to residential fiber-optic internet might be in the works.

Stay tuned to KNOM for updates on if and when further announcements are made and how that could impact the region’s residents.

Image at top: The server room at Nome’s Trinity Sails and Repair, which is the only confirmed company to be in negotiations with Quintillion to provide residential service in Nome (photo: Gabe Colombo, KNOM).