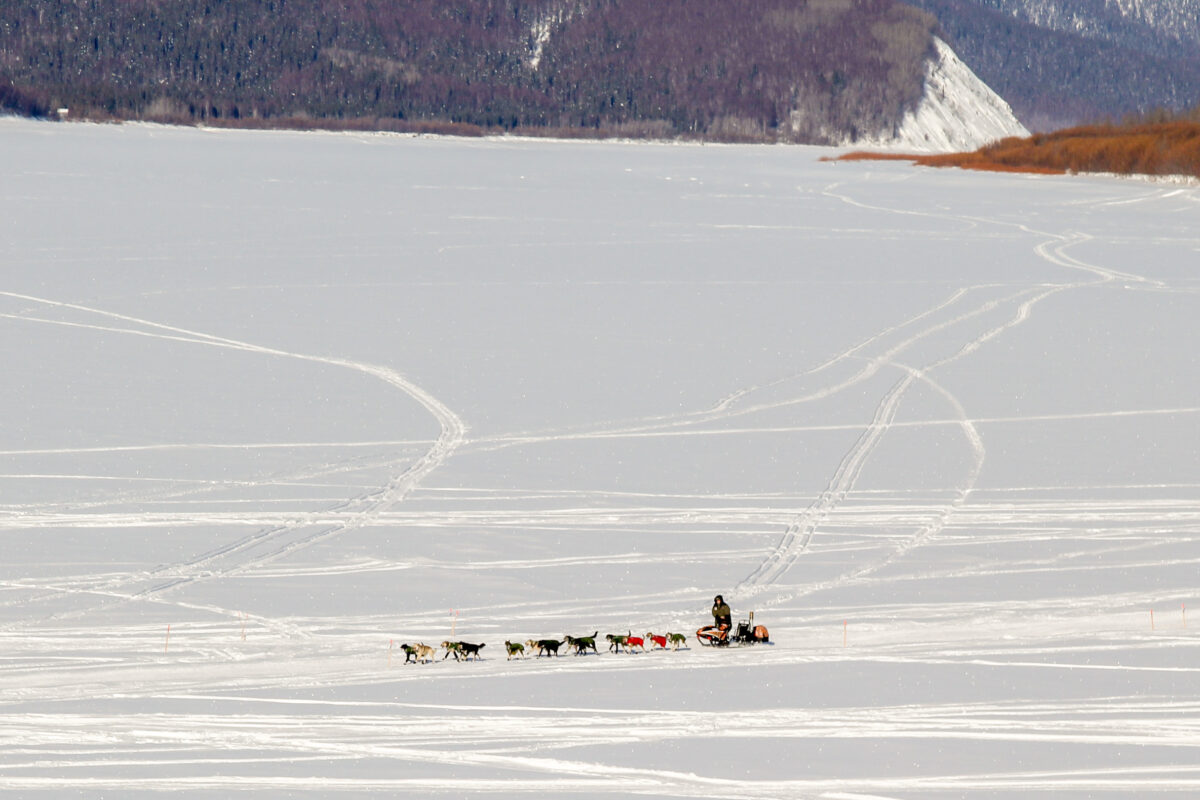 As Joar Ulsom currently leads the pack headed to White Mountain, the top of the Iditarod leader-board is filled with younger mushers, most of them in their 20s and 30s. Mitch Seavey is the only former champion among the top-20 teams. Most of the sport’s titans are way further back, if they’re still running at all.

Usually along the trail, Jeff King has a giant tub of animal crackers. But right now in Unalakleet, surrounded by bags of snacks, he’s liberally enjoying a bag of candy.

“I’m eating a couple of peanut butter cups by Reese’s, before I go up to the community center.”

King has won the Iditarod four times, among innumerable other distinctions in a sport he’s helped define for decades. But his drive to win is diminished.

“My motto has been, ‘I’m gonna get there as fast as I can without rushing.’ And ya know, I just need sleep now I didn’t used to need, or at least I’m not willing to go without to keep up with these yayhoos. I’m not physically up to it.”

As he watches younger mushers stress over minutes lost in their scramble to win, King doesn’t feel envy. Instead, it’s causing him to re-examine a notorious reputation for competitiveness that came at the expense of much else.

“There’s even part of me on the Yukon watching these guys go, ‘why are you, and why did I, used to feel so compelled to get my dogs to Nome faster than your dogs?’ Who really gives a rip?”

Instead, he’s approaching the race more philosophically, and compares racing his dog-team a thousand miles to his mother growing heirloom tomatoes.

“You know, you don’t rush it. You plant it, you nurture it, you care for it, and then, you monitor the fruit. And in this case, the fruit is the energy and athleticism of the dogs. But you don’t pick the fruit until its ready.”

What King means, is that he isn’t going to push his dogs or himself for the sake of race position. And perhaps this sounds familiar. Last year King sang a similar tune when, early in the race, he was solidly in the middle of the pack, yet sprinted down the coast and seized 11th place. Though he’s kept a comfortable pace this year, he’s looking forward to speeding down the next few hundred miles. But he insists it has nothing to do with winning. It’s just fun to do when you’ve got a gang-line full of ripe tomatoes.

A single spot ahead of King is one of his main competitive rivals: Martin Buser, himself a four-time champion, as well. He’s just finished a baggie of muktuk given to him as a gift, and is on the way inside for a nap. Buser chuckles describing his slog over the portage into Unalakleet.

“Hahahaha. It wasn’t any faster than the Yukon. Everything feels like (it’s) going in slow motion this year.”

Buser is upbeat, but there are notes of melancholy. He’s had a little bit of fun this year, but after years of jockeying for first place, he says it’s frustrating to have a good team, solid strategy, and familiar routines, yet still be just barely in the top 30.

“It’s just part of the game, ya know. One of the trials and tribulations we have to overcome.”

Buser and King haven’t said anything about not running future Iditarods. But that isn’t the case for DeeDee Jonrowe, one of mushing’s most vibrant celebrities. She announced a while back that she’d be retiring from competition, then scratched early in this year’s race.

“My personal health had gotten to the point where dog care could possibly be compromised. And that’s not who I am, that’s not who I want to be. And quite frankly, I think I could have been a burden.”

Jonrowe flew to Unalakleet to stay with friends, greet peers at the checkpoint, and start enjoying the race from a new vantage point. Jonrowe says she’d like to spend the next few Iditarods as a volunteer at the checkpoint in Unalakleet.