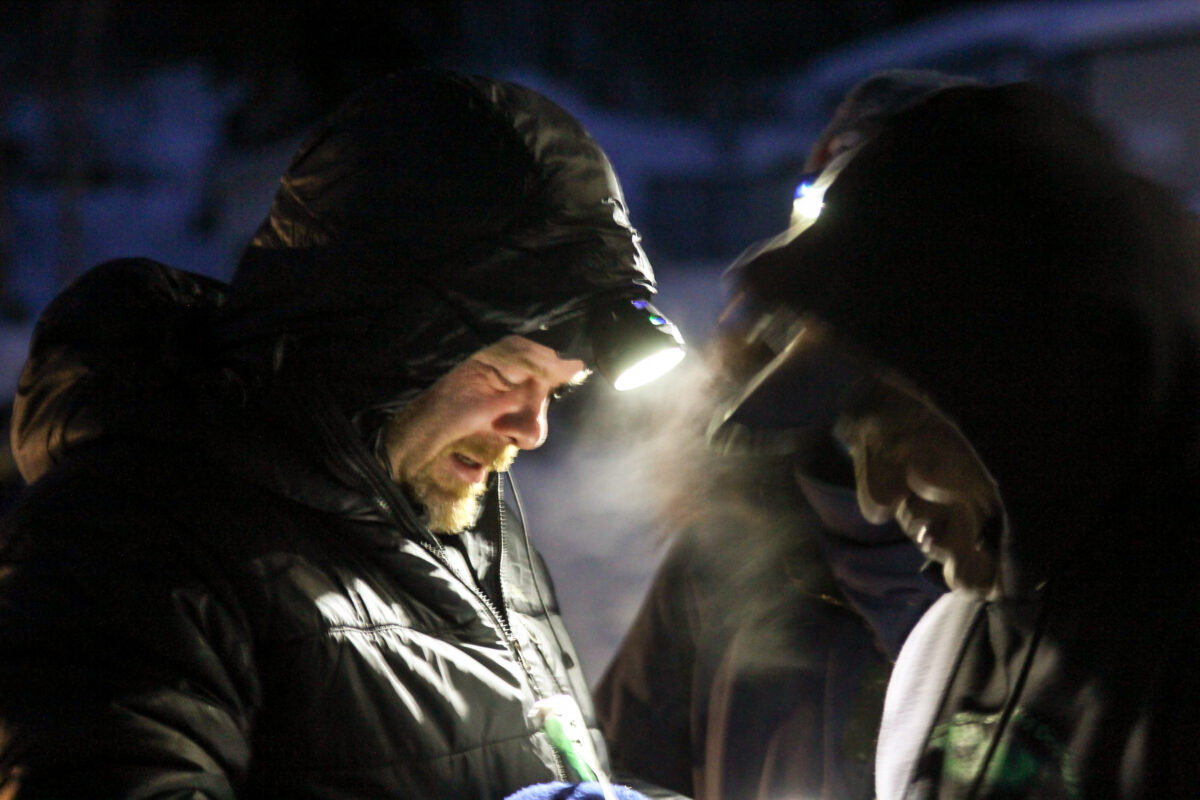 It wouldn’t be an Iditarod without a little weather. And this year, that’s caused a critical checkpoint to all but shut down, forcing top teams to adapt their run-rest strategies amid the long, flat slog up the Yukon River.

As Alaska Public Media’s Zachariah Hughes reports, with planes unable to get supplies out to Eagle Island, mushers scrambled to get a mandatory rest in before one of the most formidable overnight trips of the race.

The mood inside the Anvik City Building is festive. Two guys are playing guitar by the door. Crews of snowmachiners who have been following the race at a leisurely pace are stretched out at folding tables, trading stories over cups of black coffee. And a few teenagers pop in and out to scan the room, looking for visitors who might pay 5 or 10 bucks for a snowmachine ride to avoid hoofing it up the town’s big, steep hill.

But just outside, the mood could not be more different.

Jessie Royer is polite, but direct as she hears about checkpoint changes resulting from the Eagle Island situation. The austere stop is midway through a long run between the communities of Grayling and Kaltag. And since Iditarod pilots couldn’t bring in food or supplies, on Friday morning, officials made the decision to downgrade it from a checkpoint to just a “hospitality spot,” little more than a shelter cabin with some supplies for heating up water. That means Royer and other mushers have to load up on supplies like food and straw at Grayling, then haul whatever they need for 130 miles. Conveying those complicated logistical adjustments to tired, rushing mushers fell on volunteer checker NJ Gates.

“You can take what you want from here.”
“Yeah, I know, it just kinda sucks that we only get one bail there.”
“There is Heet at Eagle Island, but no straw.”

For the top 20 or so mushers, the race is still very much up in the air, with some of the sport’s best all clustered tightly together, separated by mere minutes. Teams arriving into Anvik are suddenly facing not just the usual battery of questions from vets and checkers, but also a barrage of information about re-shuffled logistics with their supply bags.

As Richie Diehl pulls in just minutes after one musher and a few more before the next, he’s trying to process new information and incorporate it into plans three, four, and five steps down the line.

Diehl and others are making those calculations on the fly, sleep-deprived, and facing a night of descending temperatures and a worsening headwind.

Earlier in the day, the Eagle Island change seemed to make everyone reassess where they would stop for the 8-hour rest that has to be taken at one of the checkpoints along the Yukon River. Many mushers opted to do it at the first possible stop, in Shageluk. On arriving in Anvik, Wade Marrs tells the small crowd that wasn’t his original plan:

“Sorry we missed you guys this year, I was hoping to come here.”
“Yeah, next time.”
“But the weather did not permit.”
“Good luck.”
“Thank you guys very much.”

This isn’t the first time in the race’s history that Eagle Island has had to essentially close down because of weather. And race judge Kevin Saiki says coping with the unexpected is a fundamental elements to the competition.

“You know one of the whole factors about this Iditarod experience is the flexibility that people need to have to adapt to changing weather, trail conditions, whatever the case might be, ya know.”

One person the change did not quite so negatively impact is Nic Petit. He reached Anvik early Friday morning and declared his 8 hour rest, way before a decision about Eagle Island was ever made. Still, like everyone else, it means he’ll have to haul more supplies in his sled getting from Grayling to Kaltag.

“Well it changes everybody’s plan, doesn’t it? Even if you don’t have a plan, it changes things. No big deal. But, I gotta go guys.”

And with that, Petit rouses his dogs and sets off for the long run ahead.

Posted in Iditarod 2018 and tagged Anvik, Eagle Island, Grayling, Jessie Royer, Kaltag, Nicolas Petit, Wade Marrs
← A Profile of Takotna, an Iditarod Town Whether the Mushers Are There or NotNome-Golovin 2018: Final Results →