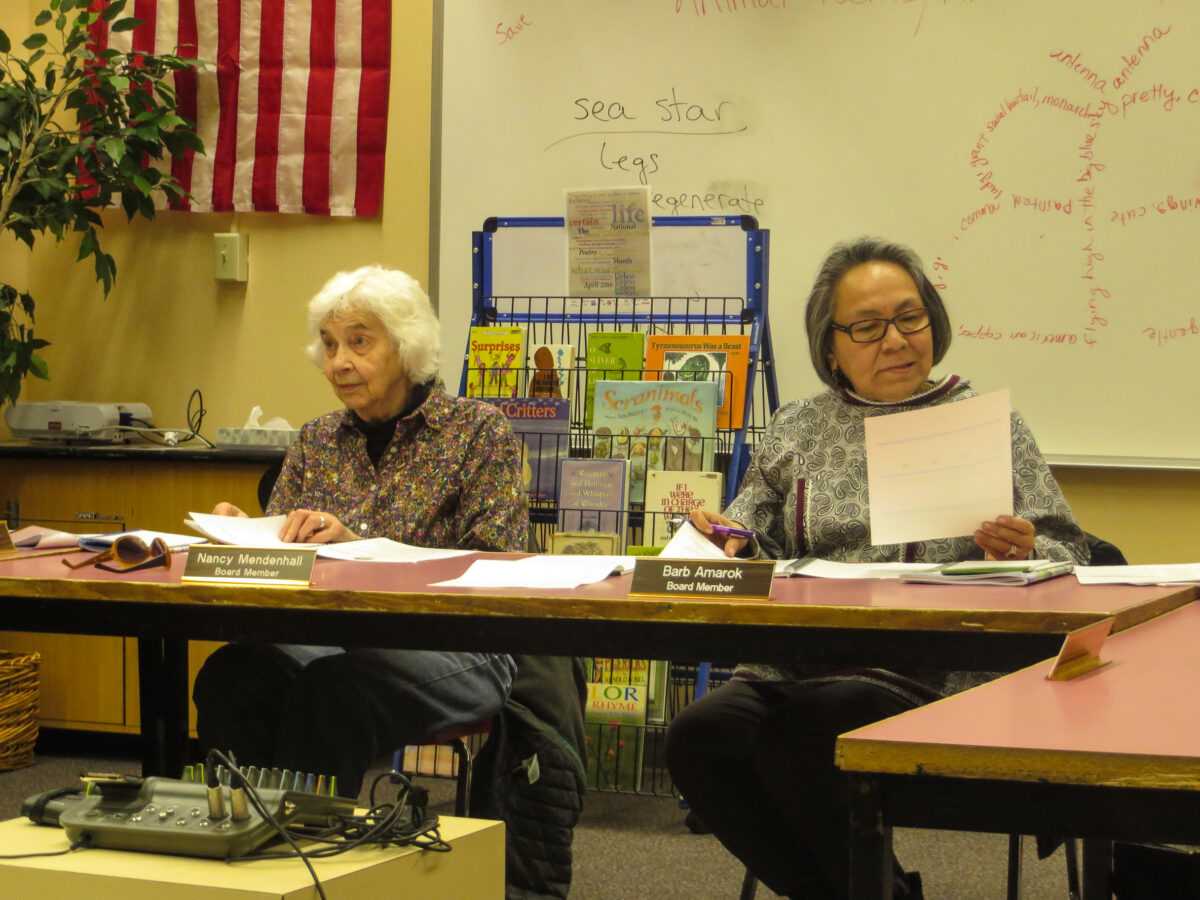 The Nome Public Schools Board of Education’s regular meeting lasted late into the night Tuesday, dominated by a discussion of severe budget cuts.

Faced with expected flat funding from both the state and city, the fiscal year 2019 draft reduces expenditures by nearly $250,000 from this year’s $15.4 million budget.

The draft reduces supply and textbook budgets across the board and removes funds for staff development travel and after-school activity busing, among other things. It also eliminates several support positions, including four elementary school teacher aides and the elementary school social worker, librarian and music teacher.

When council member Sandy Martinson asked if there was any “fluff” that could be cut elsewhere, Superintendent Shawn Arnold was blunt:

“That’s what this is. Four years ago, we had 115 staff. Right now, we have 102. And this reduces us to about 95. And we have the same number of students that we serve. To compare another city school district, Valdez has 684 students, and they have 124 staff members.”

In his written superintendent’s report, Arnold calls this “the most challenging economic period Nome Public Schools has ever experienced.” He says it’s hard to number the cuts that have already been made: things from color copies and staff lunches at in-service days to switching to more energy-efficient light bulbs.

At this point, he says, the priority should be on maintaining primary classroom instruction and not cutting class sizes, even if that means hard choices elsewhere.

Even so, Martinson expressed concern about cutting the librarian.

“I just can’t imagine having libraries without librarians. And I feel like with the emphasis we have on reading at our schools that this is a really difficult thing to propose.”

In this case, Arnold says, there would still be funding for a part-time library aide, but the burden of checking out books and other duties would likely fall on teachers and community volunteers.

The burden on students to fund their own travel for things like sports would also increase, with the student travel budget cut from around $150,000 to about $125,000. But Business Manager Genevieve Hollins surprised the board when she read out the amount students raised last year, through things like bake sales and car washes: $360,000.

A chorus of “wow”s and “OMG”s rang from the board: Nancy Mendenhall called it “incredible.” Jennifer Reader remarked, “Isn’t that interesting,” and suggested the student travel budget be cut further to fund supplies for the Youth Facility. It’s just one of the many trade-offs the board will consider over the next few months.

They’ll also consider the adoption of a subsistence school calendar, which would move the start date back by two weeks, to after Labor Day. That would allow students to spend all of August participating in subsistence activities with their families. After several years of debate, the Alaska state commissioner of education is now allowing some leeway for school districts, Arnold says.

Board President Barb Amarok says she sees this as a positive step towards more local control.

“It’s always been hard to take the month of August, because that does affect the activities of the families in our community. It’s not just berry-picking and green-picking, it’s moose season.”

Other board members say they’re concerned that cutting in-service days, in order to fit 900 instruction hours into a shorter school year, would make it harder for teachers to collaborate.

In other business, Nome-Beltz High School Assistant Principal Lucas Frost announced his resignation, effective at the end of the school year. And the board offered Shawn Arnold another three-year contract. He’s been superintendent for four years.

The Board of Education will meet for a joint session with the Nome City Council to discuss the budget next Monday, February 12th, at 6:30 p.m. at City Hall. The board will hold a work session on Tuesday, February 27th at 5:30 p.m., and its next regular meeting Tuesday, March 6th at 5:30 p.m., both in the Nome Elementary School library.