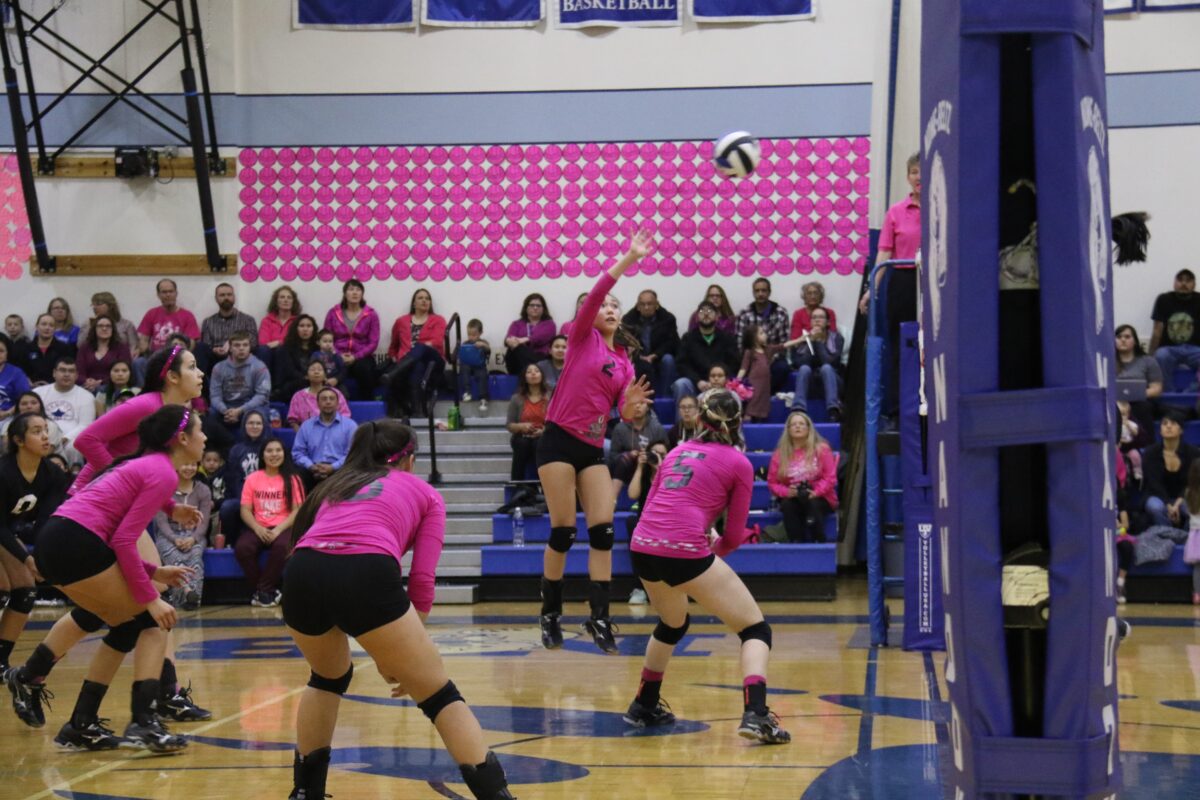 The Lady Nanooks volleyball team hosted players from around the state last weekend at the Arctic Pinkies Volleyball Tournament. Barrow, Bethel, Kotzebue, and Anchorage’s Service High School all competed, along with three junior-varsity teams from Bethel, Barrow, and Nome.

This year’s tournament is the fifth Nome-Beltz volleyball has hosted for the Arctic Pinkies. That’s an organization that works to raise awareness for cancer patients. According to Head Coach Lucas Frost, the team raised and donated $3,000 this year, bringing their total donation amount to over $15,000.

A big chunk of that came from the sale of “honor balls”: pink volleyballs people could purchase in memory of their loved ones. This year, Frost says, they sold more than 700:

“We actually almost filled every section of our bleachers with the honor balls this year, and every year, it’s grown.”

The team also raised funds through 12 community sponsors and selling t-shirts and concessions.

On the court, the Kotzebue Huskies won the tournament, but only after defeating the Barrow Whalers, who came back through the loser’s bracket to win the first of two championship matches. The Huskies snuck by with a 30-to-27 win in the final match. Frost says it made for an exciting night:

“For people that don’t understand volleyball, or don’t get to see it, it can be very thrilling, and this tournament definitely proved that.”

The best-of-two tournament matches Saturday didn’t count towards division standings. But the best-of-five, round-robin matches Thursday and Friday did. Ultimately, Barrow held on to its top spot, followed by Kotzebue, Bethel, and then Nome.

The Lady Nanooks had ups and downs over the tournament’s three days. They swept Bethel Thursday night and beat Kotzebue Friday in a close match. But two losses on Saturday forced them out of the bracket early. Frost says there was at least a silver lining:

“So, as far as hosting a tournament that you lose — you’re the first loser out, essentially — that really stinks. But it did give us, it gave me, the opportunity to concentrate on everything else that was going on.”

One of the other things going on was the presence of special guest DeeDee Jonrowe. She’s a 35-time Iditarod musher and a breast cancer survivor herself. Frost says he worried she’d be high-maintenance, but:

“She turned out to be the most genuine, appreciative woman that I think I’ve probably ever met. She was so excited to be here and to be meeting the teams, and to be talking with the youth. She was just all about being here and supporting us.”

Jonrowe will run her final Iditarod in March. And before that, the Lady Nanooks will get another chance to take on Bethel and Kotzebue in Bethel this weekend. They head to regional championships at the end of the month.