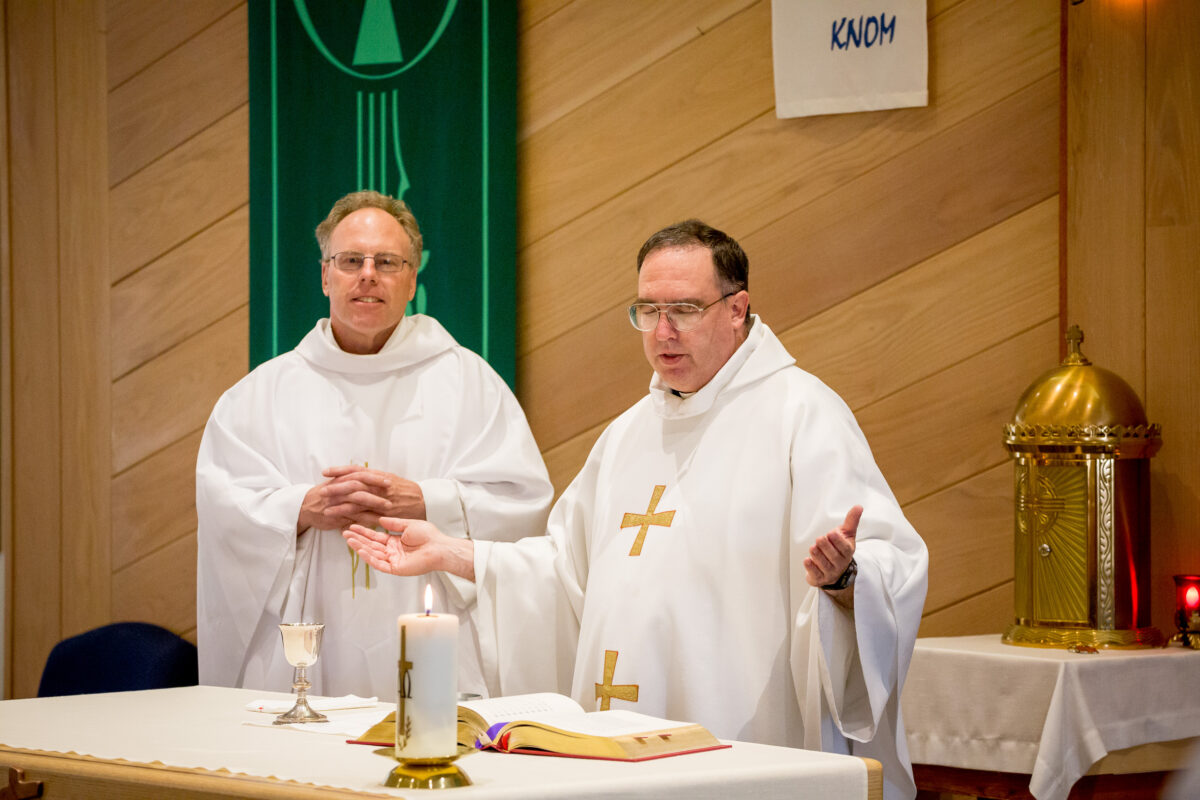 KNOM welcomes the opportunity to spread the ministry of our local priests, many of whom have to stretch their service to several parishes. This is especially true for our hometown parish, Nome’s Saint Joseph Catholic Church, from which Sunday Masses are broadcast live on KNOM each week.

Our pastor, Father Tom Kuffel (pictured top, left, celebrating Mass with Father Ross Tozzi), supports our mission, and we reciprocate. Fr. Tom has been serving in Nome for several months, following the departure of Father Vince Burns earlier this year. We’re happy to introduce to you the latest voice of Catholic Mass on KNOM’s Sunday mornings.

Born and raised in Wisconsin, in a rural suburb outside Milwaukee — amid “farm fields, marsh, and many lakes,” he says — Tom graduated from high school in 1980, then studied at Gonzaga and Marquette Universities, earning a bachelor’s degree in philosophy at the latter in 1984. His first work out of school was as a teacher at the Jicarilla Indian Reservation near Dulce, New Mexico, after which he traveled to Rome, to study theology at the Angelicum: St. Thomas University in the City. A year into his studies, he decided to become a priest.

Tom became Father Tom in 1989 and, after his ordination, stayed in Italy but worked in mission trips to the small Caribbean island of Grenada. It wasn’t the “tourist side of the island” that most see, Father Tom clarifies, but rather “the other side”; he worked with the “poor, homeless, and outcasts” alongside the Missionaries of Charity. In 1992, he received a Licentiate in Theology and returned stateside, beginning a 15-year tenure as a pastor for small, rural parishes — as well as a high school teacher and, eventually, a youth camp director — in the Diocese of Lincoln, Nebraska.

Father Tom then ventured to Alaska and served for many years in the Fairbanks area, within Alaska’s interior. He came to Nome in the early summer of 2016 and says he’s enjoying his time serving the communities of the parish — people who are “friendly and engaging” — even amid the adjustments of living in a place as isolated and as resource-limited as Western Alaska. Both in interior Alaska and in KNOM country, Father Tom elaborates, there are similar “struggles and challenges” for the faithful, and he sees a similar calling in both regions: “to help mature people in their spiritual journey.”

His help, as pictured below, isn’t limited to spiritual gifts, either. He pitched in to help paint in the KNOM volunteer house, just as the volunteers helped to paint classrooms at the church, several weeks earlier. We offer a warm welcome and a sincere “thank-you” to Father Tom for his ministry, service, and example — and thanks to you, too, for helping bring the Mass that he celebrates, each Sunday morning, to tens of thousands of rural Alaskans.

More from our Oct. 2016 newsletter